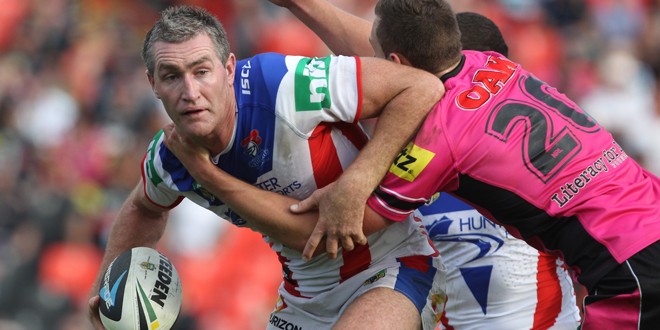 In a Nutshell
The Panthers were down 6-8 at half-time but scored four second-half tries to register a convincing win against a Knights side that suffered several injuries to key players.

How it unfolded
Darius Boyd and Kurt Gidley were both injured early for the Knights, and the problems of trying to cope with their loss proved too much to overcome, especially as they also lost halfback Tyrone Roberts going into the final quarter of the game.

Even so, the Knights scored first through Beau Scott, converted by Gidley shortly before he left the field with concussion. Elijah Taylor, newly signed from NZ Warriors, crossed for Penrith just before half-time, converted by his fellow new signing Jamie Soward, formerly of London Broncos.. Right on the hooter the Knights were awarded a penalty to give them a 6-8 lead at the interval.

In the second half the Panthers added two tries from Josh Mansour, and one each from Adam Docker and and Jeremy Latimore, with Soward adding one conversion and Peter Wallace adding four.

The Panthers will be delighted with the combination of Soward and Scotland international Wallace at halfback, while the Knights will lick their wounds after an opening-day defeat that was expensive in personnel.

The game was watched by 11,369 fans at Sportingbet Stadium.

Reports and photos from all the NRL matches in the opening round will feature in this Monday’s Rugby League Express, available from the shops and online at www.pocketmags.com