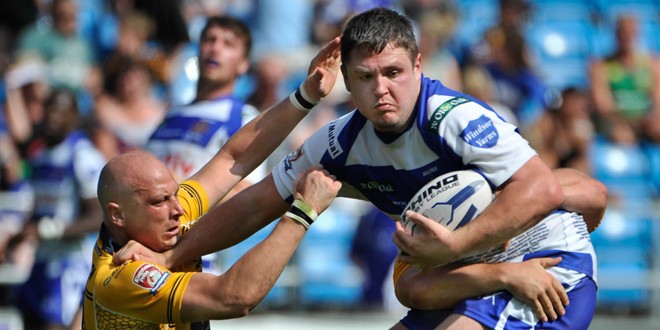 Whitehaven coach Dave Woods is hoping that his side can nail a top six finish – a position that seemed likely last year until a slump in form at the end of the campaign.
There’s been a big turnover in Woods’ squad, with nine new faces and 13 leaving for a Championship competition that’s bound to be intense in 2014.

“It will probably be more competitive because of the restructuring that’s happening the year after; teams are going to spend some money as they want to be in that top tier,” said Woods.

“We were in sixth place until we let ourselves down in the last few rounds last year, and we feel we have added strength to the squad this year, so we’d like to finish in the top six somewhere.”

Amongst those nine new signings are a couple of names well known to fans of Super League clubs. Lee Mitchell has spent time with Warrington Wolves and Castleford Tigers, while Shaun Ainscough has been with Wigan Warriors and Bradford Bulls.

“We have added some real good ones,” said Woods, when asked about the newcomers.
“Lee Mitchell is a really strong line runner in the back row and he adds something with his enthusiasm.
“Shaun Ainscough has been amongst the leading try scorers at the clubs he’s played at and we’re expecting a lot from him.”

Two other interesting signings are Tom Carr, the former York fullback, and stand-off or centre Chris Taylor, who is on a season-long loan from Wigan Warriors.

“I’m looking forward to see Chris Taylor play,” said Woods.
“He’s shown a lot in training and will be good to see – we have a couple of good centres in Scott McAvoy and Jessie Joe so we are looking for someone to fill the stand-off position and he’ll get the first chance at it.”

As for Carr?
“You don’t get in the top three young players unless you are doing something right – he’s very good on his feet.”

But not all of the close-season signings will be rushed by Woods.
“Ben Milburn and Jordan Burns are young blokes who are from the area and have been training well and improving each week. They still have a fair bit to do but they are working well with the senior blokes. We’re not expecting too much from them this year, we don’t want to put pressure on them but we want them to enjoy their footie and learn each week.”

Whitehaven will continue their partnership agreement with St Helens, with Woods expecting one or maybe two players on long-term loan deals with some deals that will be month to month.

“St Helens have been great with us – they are a tremendous club with some exceptional kids there.

“Last year it benefited both of us; we were grateful for players of the calibre of Paul Clough, Joe Greenwood, Carl Forster, Ant Walker and Adam Swift. Most of them who came to play for us ended up playing Super League a couple of weeks later. Adam Swift being a prime example; he wasn’t in their Super League squad but played four or five games for us, got man of the match in a few and then finished the season and will probably start this season in Super League.