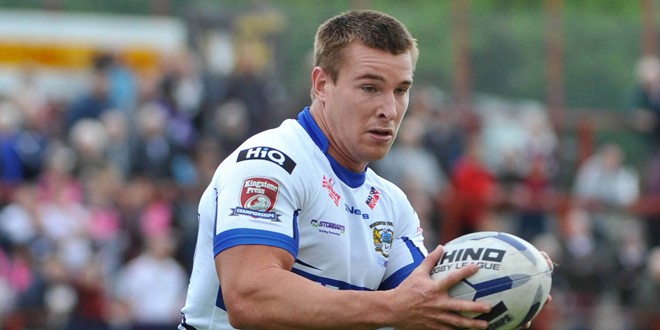 Workington Town will look to add to their squad as they continue their preparations for the new season.

Town issued their squad numbers at the weekend with the list containing just 20 names and numbers.

“We are a little bit skinny, especially in the forwards at present, but hopefully can sort that out before the season kicks off,” coach Gary Charlton told League Express ahead of Sunday’s warm-up game against Whitehaven.

“We are full of young Cumbrian lads with a couple of overseas players mixed in. We have been trying to build a Cumbrian team that can match what goes on in this league and I think that we are heading in the right direction.”

Town finished in eighth spot in the Championship last term, one place above local rivals Whitehaven, and a similar result in 2014 will probably be seen as a good result for a club, which has lost a number of experienced players.

Workington have recruited in the local market, looking to find youngsters like Brett and Callum Phillips who can progress to Championship and hopefully international Rugby League.

“We’ll only pick players that we feel are suitable for Workington Town; if they are suitable then we’ll try our utmost to get them in. If it takes a wee bit longer than anticipated then we’re happy with that. We’re not just bringing people in to fill shirts; they have to bring something to the club.

“It’s a nice young squad that trains really hard and looks after itself. They will only get better with experience.”

During the autumn, Rugby League fans in Workington took to their two World Cup games in enthusiastic numbers.

“The World Cup was a great shot in the arm for Cumbrian Rugby League and it showed that people want to watch top class Rugby League. I’m a great believer that there should be a Super League club in Cumbria, because people will come out and watch at a higher level,” said Charlton.

“It was great to have the World Cup crowds, and the next best thing for us is the game against Wigan. They will bring a strong team because it’s a testimonial for Paul Prescott and the Cumbrian crowd will come to see the stars that Wigan will put out.”

And despite the dual-registration partnership with Widnes having ended in December, more Super League players could be on the way, with Charlton hinting at a possible replacement partnership deal.

“The directors have told me nothing yet, but I’m sure that there will be something in the pipeline.”