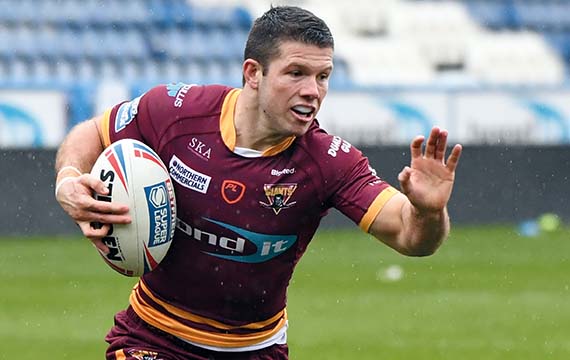 Huddersfield Giants halfback Jack Cogger can’t wait for his first taste of playing at home in front of fans.

Ian Watson’s side have had three away games since coronavirus restrictions were eased in mid-May, winning at Warrington and Leigh before a first defeat in four Super League outings at Wakefield.

Australian Cogger, a closed-season recruit from Canterbury Bulldogs, says no one in the Giants camp saw the 38-12 loss coming.

And the 23-year-old, who also played for Newcastle Knights in the NRL, says he and his teammates are desperate to put on a show for their supporters against Wigan on Friday and reignite a climb up the table.

“Those games at Warrington and Leigh were awesome in terms of seeing and hearing the fans,” said Cogger, whose dad Trevor, also a halfback, had a spell at Leigh in the mid-Eighties, having previously played 160 times for Wests Tigers.

“That was the opposition supporters in limited numbers, so to play in front of our own fans, plus some from Wigan, at the John Smith’s Stadium is something I’m really looking forward to.

“My dad told me how fanatical the supporters are over here, and I love the way they really engage with their team.

“Hopefully we can give our fans something to cheer, and we certainly want to respond to what was a really disappointing defeat at Wakefield.

“We didn’t get the start to the season we wanted, but with a new coaching team and some new players, we knew it might take some time to gel.

“Getting three wins in a row around a narrow defeat to St Helens in the Challenge Cup suggested we had done that, but for whatever reason, we just didn’t turn up against Wakefield.

“We reviewed the match, and we’ve tried to learn a few lessons, but we won’t dwell on it, because we know we are much better than that.”