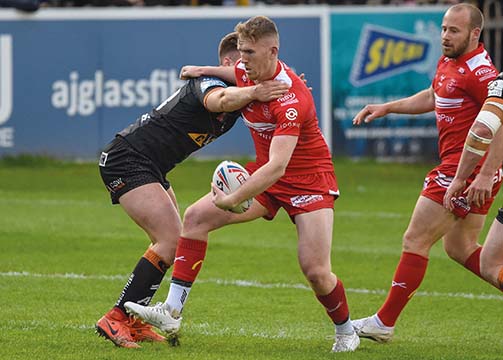 Hull KR coach Tony Smith wants Rowan Milnes to carry on roaming as his side try to add to their four wins so far this season.

Hat-trick winger Ryan Hall might have made the headlines as Leigh were beaten 40-16 at Hull College Craven Park in Rovers’ last outing.

But it was stand-off Milnes who won the praise of Smith, whose side are next in action at home to Salford on Friday.

The 21-year-old came through the Bradford Academy and made his first-team bow in 2018.

Along with fellow halfbacks Joe Keyes, back rowers Elliot Minchella and Matty Storton and prop Anesu Mudoti, he was one of five players signed from the Bulls in October 2019.

Milnes was loaned back to Bradford last year, scoring four tries in six appearances before the pandemic ended the season early.

He returned to Rovers and featured three times in 2020, before replacing the suspended Mikey Lewis for the 26-6 home win over Leeds in April.

“There are no special instruction there,” said Smith of the Bradford-born player, who formed a useful partnership with Jordan Abdull.

“He played good footy, particularly second half, against Leigh. He got better as the game wore on.

“They both turned up on both sides of the park, which I love. Rowan certainly had his strongest game of the year and I’m pleased for him.”