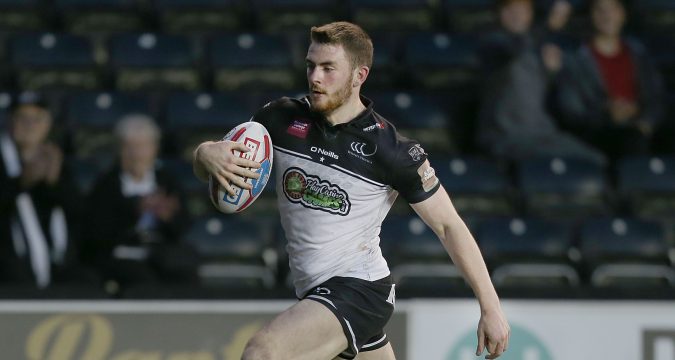 Widnes offered fans a glimpse into the future during their recent pre-season match with Warrington.

And what the Vikings fans witnessed was remarkably encouraging.

Denis Betts named a side with an average age of 21 for the club’s match with their fierce rivals Warrington who, in contrast, fielded seven senior-capped internationals.

Despite that, Widnes’ young-guns put in a superb display to overcome the Wolves 26-22, with a number of the talents nurtured at the club starring in the contest.

Last year’s well-documented injury crisis left Betts with no choice but to throw a number of the club’s Academy products in at the deep end and it became evident that the step up came too soon for many of those put in the firing line.

But the recent display against the Wolves suggested many of those players are far better for the experience and can help the Vikings climb up the table in 2018.

The one thing Widnes so desperately lacked last year was competition for places. However, the youngsters who now possess first-grade experience will provide that.

Jordan Johnstone was among those who impressed and appears to have bulked up in the off-season. His presence around the squad will put pressure on the likes of Joe Mellor, Tom Gilmore and Aaron Heremaia to play at a high level.

The star of the evening was fullback Olly Ashall, whose stunning performance has put early pressure on the club’s senior fullback, Rhys Hanbury, to retain high standards.

In the pack, loose forward Brad Walker showed glimpses of his ability while the Chapelhow brothers also showcased how much they have improved since the beginning of last year.

Throw the likes of Danny Walker and Ryan Ince into the reckoning, and the Vikings suddenly have a bunch of young, promising players who all look capable of pushing to become regular first-team players this year.

Despite that, the majority of them may struggle to make Denis Betts’ matchday squad for their opening Super League fixture with Catalans. The fact players of such quality can be left out signals just how much depth Widnes’ squad actually has at its disposal this year.

Betts has made a big thing of pointing out the potential Widnes have within their Academy and at times it has tested the patience of the club’s support base, keen to see that potential turn into ability that will benefit the first-team. Slowly, we are starting to see the rewards bear fruit.

Widnes don’t have the funds to spend up to cap. As a result, it’s pivotal that they can call upon their own. They are now in as good a position as ever to do that. It’s inevitable that at some stage, all the aforementioned youngsters will be relied upon to do a job for the Vikings. The difference now is that they far better equipped to carry out their duties.

Although the Vikings could still do with a further prop and a winger to help replace Corey Thompson, Widnes look far better equipped this year than they did 12 months ago.

Last year’s nightmare could yet prove to be the catalyst for a brighter tomorrow.