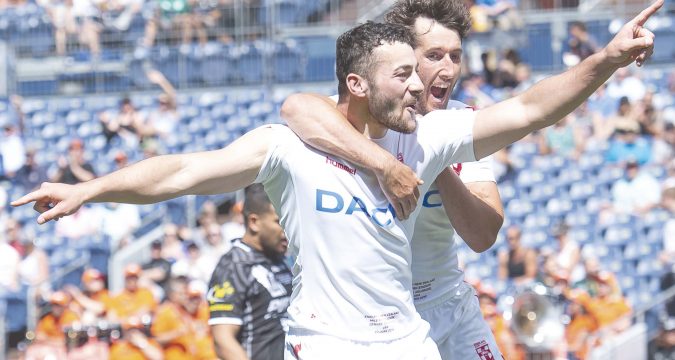 The three-match Test series between England and New Zealand kicks off on Saturday afternoon at the KCOM Stadium, the home of Connor’s club side Hull FC.

Connor gave an impressive performance in the halves in England’s 44-6 win over France at Leigh, earning nomination as man of the match. He received the same award in the Denver Test in June, and he is hoping to gain his third England cap this Saturday.

He has been named in the 19-man squad but as has George Williams and Richie Myler, along with Sam Tomkins who could also feature in the halves.

“I was happy to play well against France and throw my hat in the ring for Saturday and hopefully I’ve given Wayne a headache on selection,” Connor told League Express.

“I enjoyed myself against France. A few of the boys hadn’t played in quite a few weeks, so it was good to blow the cobwebs off, but it’s the start of the Test series now and the first game is massive.

“You’ve got to take your opportunity on the big stage. I’m known for being pretty gobby on the field and that helps when it comes to enjoying playing for England.

“There are a few things I can work on, but when you are playing against world-class players you need to step up and perform because there is no place for second best and you have to give it everything and that’s what I do.

“I hope to get selected, but I am relishing the opportunity to play at home and I’m sure plenty of Hull fans will turn out for it. I know they always come out in numbers, so I can’t wait.”

Connor can play at halfback, centre, wing or at fullback but he claims not to be focused on any position in particular, as long as he is in the squad.

“I’m not bothered where I play because it is international football,” the 23-year-old added.

“As long as I am there or thereabouts then I’m not too fussed. Obviously, I can play in a number of positions and I hope I’ve given Wayne a selection headache for the Test series.

“New Zealand are a great side and they have a different mix of players compared to the team we played in Denver, but we just have to focus on ourselves. We know what they are going to bring and that they are big down the middle, but we will match them.”