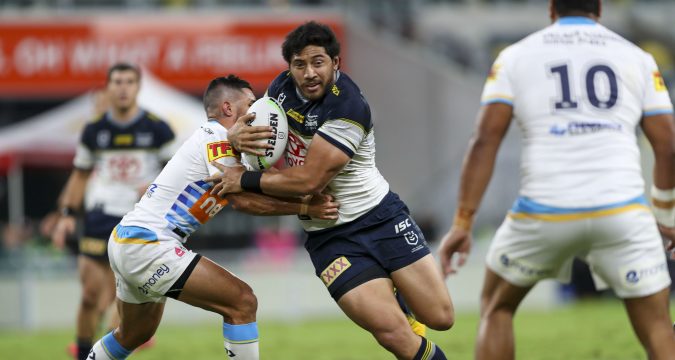 The Titans remain bottom of the ladder after losing 36-6 to the Cowboys.

The Cowboys scored within ten minutes as Valentine Holmes assisted Ben Hampton out-wide but the visitors hit back imminently through Brian Kelly, whose inventive pirouette fooled Kyle Feldt and Holmes.

Scott Drinkwater edged Queensland back into the lead, with his double pump sending Justin O’Neill through a gap and, despite a sin-bin to Dunn, were able to further extend their lead with a penalty prior to the break.

Thereafter, North Queensland dominated proceedings against ill-disciplined Titans opposition with three further scores. Reece Robson charged his way over twice within seven minutes prior to a well-worked shift, which was completed by Hampton on the left flank.

After a sin-bin to Coen Hess, Gold Coast attempted to score a consolation but were denied due to obstruction. Instead, it was the hosts who scored as Holmes flicked a pass onto Feldt.

A full match report from this fixture, including images, will be available in Monday’s League Express.