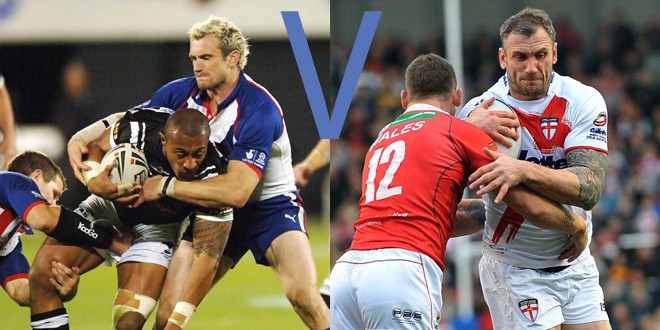 In the latest issue of Rugby League World magazine, RFL chief executive Nigel Wood claims the sport’s governing body are looking to organise a Great Britain tour to Australia in 2015. Within minutes of the news breaking our Twitter feeds were jammed with reaction, both in favour of and against the idea. Two of our writers looked at the argument from each side.

Joe Whitley (JW): There seems to be a lot of negativity surrounding today’s announcement that the RFL are pushing for a Great Britain tour in 2015. As far as I’m concerned it can only be a good thing. What do you think?

Aaron Bower (AB): Great Britain tours are an idea best left to the folks over in rugby union, if you ask me. The game has just experienced the most successful World Cup in its 119-year history. Grouping emerging nations like Scotland, Ireland under the GB umbrella would be another untimely blow in the death of these countries that are trying to produce their own player pools.

JW: Surely it would only do that if the RFL sacrificed tournaments featuring the smaller nations? I don’t think the plan is to bring in the Lions tour at the expense of anything else, and if that is the case then it is surely a no-brainer. As far as I’m concerned there’s nothing more exciting that everyone getting together to take on the Aussies. In fact, watching the 2004 Tri Nations is what initially got me into Rugby League.

“For some reason, I felt more pride watching Great Britain back in the early 2000s than I ever have done with England and, as far as I am concerned, the RFL has to bring it back.”

AB: If the Lions toured Australia, then Ireland, Scotland and Wales would ultimately not play games – or at least games of any value. And what is the point of calling it a Great Britain tour? Let’s be honest – how many Scottish, Irish and Welsh players would make the cut on a GB tour? You would have to say one or two at best. If the game wants to build on the success of the last six months, the Rugby League International Federation has to knock Great Britain on the head, and get games scheduled for the emerging nations. That is the priority.

JW: Maybe not at that moment, but it doesn’t mean they won’t get the opportunity either side of the tour. I don’t understand why it is a case of one or the other – why can’t we have our cake and eat it like they do in rugby union? They play the Six Nations annually and then have a Lions tour every four years. In terms of the numbers of non-England players who would have a chance, there’s Danny Brough, Matty Russell, Liam Finn, the Grix brothers, Craig Kopczak, Ben Flower, Rhys Evans, and that’s just off the top of my head.

AB: The key difference between RL and RU is that their international game is already fully developed. Ours is very much in an embryonic phase, and needs nurturing carefully. The crux of the problem is having a GB tour would take all the attention away from countries like Scotland – who lit up parts of the World Cup with their play. From that list, I think only Brough has a chance. That’s the essence of my point – we need to be investing time and money into the game in Scotland, Wales and Ireland – not having unnecessary Great Britain tours, especially when the Australian’s don’t care anyway.

“The biggest problem is getting the Aussies excited; they wouldn’t be interested in entertaining a GB tour any more than they would an England tour, a New Zealand tour or a Madagascar tour.”

JW: The most important point, if you ask me, is that a Great Britain tour has the potential to inject excitement and pride into our sport and increase both participation and attendances across the UK as a result. Success against the Aussies, which uniting as Great Britain definitely has a chance of bringing, would galvanise the sport and get more people involved. Although watching the part-timers of Wales and Scotland can be enthralling, it doesn’t have the polished appeal of an Ashes tour and, let’s face it, it’s not going to get bums on seats like bringing back the red, white and blue would.

AB: A Great Britain tour wouldn’t capture the imagination over here any more than an England tour would, in my opinion. I agree success against the Australians is a beautiful and brilliant thing, but England could do that on their own. The biggest problem is getting the Aussies excited; they wouldn’t be interested in entertaining a GB tour any more than they would an England tour, a New Zealand tour or a Madagascar tour.

JW: I couldn’t disagree more. For some reason, I felt more pride watching Great Britain back in the early 2000s than I ever have done with England and, as far as I am concerned, the RFL has to bring it back.

Who do you agree with? Let us know your thoughts by commenting below or join in the debate on Twitter and Facebook.