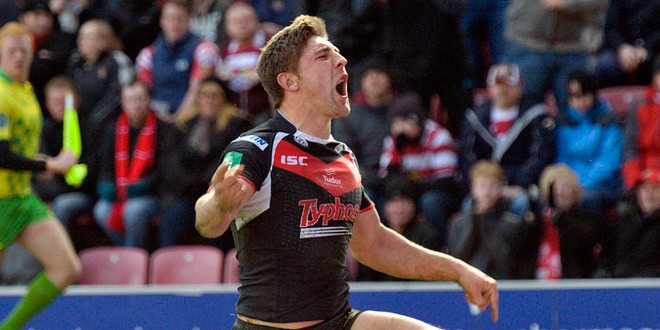 Joe Whitley (JW): Despite being on the losing side today, Tommy Makinson had another superb game, scoring his 10th and 11th tries of the season. There are calls for him to represent England in the near future. What do you think?

Aaron Bower (AB): I certainly think so. It’s a shame England don’t really have any fixtures to speak of in the middle of the season anymore, as someone like Makinson would be ideal for that kind of scenario. He’s got to a point now where he has become England’s best winger (on form), and should be a certainty to make the trip Down Under for the Four Nations at the end of the season. He has all the skills and talent to make it at the very top of the game. JW: I agree he’s got to be on the plane, but do you think he has what it takes at this early stage of his career to step it up and be a starting international? If you were Steve McNamara, which two wingers would be in your first 13?

AB: There’s no point holding him back because of his age. He will only get better by being thrown in at the deep end so early on his career. The experience he can take from playing against top wingers like Roger Tuivasa-Sheck and Darius Boyd will make him an even better player. For me, Ryan Hall and Tommy Makinson are the best two wingers we have at our disposal. Hall is a phenomenal athlete and is rightly regarded as the world’s best winger. Some of the finishes we have seen from Makinson this year have been outstanding; he’s a freak of nature.

JW: I couldn’t agree more that he’s the country’s in-form winger – the stats don’t lie – and I’d love nothing more than for him to replicate it against the Aussies and Kiwis. However, I am not yet convinced he would be able to. Producing the goods in Super League is one thing and doing it on the international stage is another. I agree it would be a great experience for him but would it not be a touch risky if our goal is to come away with the Four Nations title? If it was up to me, I’d stick Tom Briscoe on the right and Ryan Hall on the left. Hall’s international pedigree needs no introduction, but the reason I have gone for Briscoe is the fact that Kallum Watkins is almost certain to be the starting right centre, granted he’s fit, and the pair have been linking really well so far this season. I think Makinson and Charnley as back-up gives you a good mix of experience and raw talent on the bench. AB: It’s easy to say he isn’t ready, but how do you know unless you give him a go? England’s problem for years has been sticking with the same breed and same clutch of players. You play international Rugby League on form. Makinson’s form is better any other winger currently playing in Super League. He and Watkins would be outstanding together.

JW: I agree sticking with the same old players doesn’t always translate into good performances, but you’ve got to think by the end of the season Briscoe and Watkins are going to know each other’s games inside out. Would you rather stick with a tried-and-tested, world class partnership, or give a young, albeit extremely talented, rookie a chance? On current form you’ve got to say Makinson is better than Briscoe, but this game isn’t won and lost on individual talents, it’s about partnerships and working well together.

AB: The Australian back line is composed of blokes who play for a whole host of different clubs. The simple fact is that we need to pick our most outstanding players. When it comes to wingers, there aren’t any better than Tommy Makinson in 2014.

Who do you agree with? Let us know by commenting below or joining the debate on social media