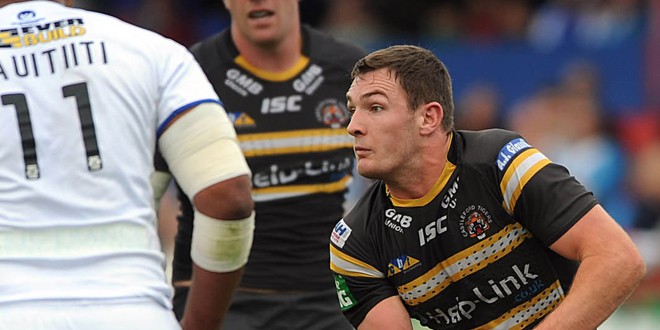 In a nutshell
Castleford Tigers got in front early but were forced to weather a storm to hold off the Wildcats and earn a valuable two points.

How it unfolded
3’ – The Tigers’ star winger Justin Carney opens the scoring after finishing off a move started by Andy Lynch, who offloaded to Marc Sneyd, who then passed on to Michael Shenton. Carney fended off Jarrod Sammut to go over in the corner. Sneyd misses the conversion: 0-4.

17’ – Former Rhinos hooker Paul McShane hits back for Wakefield, powering over the line to close the gap. Sammut converts: 6-10.

25’ – McShane is involved again, but this time it’s a stray offload that is picked up by Michael Channing, who finds Liam Finn to put through Richard Owen. Sneyd missed the kick: 6-14.

33’ – Jarrod Sammut hits back for Wakefield again and adds the extras to get Wakefield within two: 12-14.

39’ – Scott Wheeldon scores an important four-pointer just before the break thanks to a combination between James Clare and Oliver Holmes. Sneyd slots the kick: 12-26.

44’ – Reece Lyne gets Wakefield off to the perfect start with an early score on the wing, but Sammut can’t convert: 14-26.

50’ – Wakefield are in again, this time through Jarrod Sammut who grabs his second of the day thanks to his high kick that wasn’t dealt with. He misses the conversion: 20-26.

54’ – Castleford’s Frankie Mariano knocks on and is refused a try.

62’ – Just minutes after Cas wasted a good chance, Liam Finn goes over to kill off the gutsy Wildcats. Sneyd adds the extras: 32-20.

75’ – Darly Clark crosses for his second try down the right flank after Richard Owen races into space. Sneyd misses the kick: 20-37.