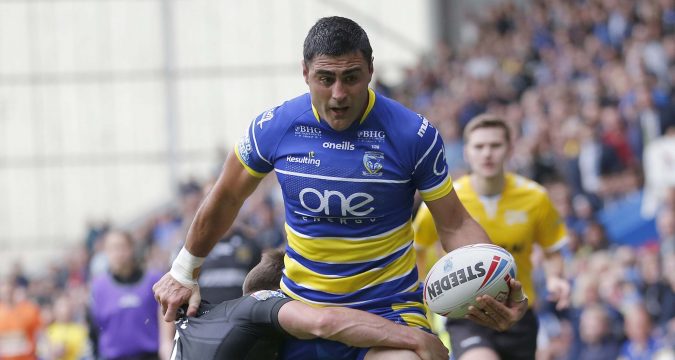 Leigh owner Derek Beaumont has revealed that Bryson Goodwin is the best signing he ever made – despite the fact he never played for the club.

The Centurions had signed the former South Sydney Rabbitohs star ahead of the 2018 season before his contract was moved to Warrington.

Speaking on Rugby League Back Chat, Beaumont revealed he sold the centre to the Wolves for £60,000, despite the fact he hadn’t even set foot inside Leigh.

“We’d signed him the year we were in Super League,” Beaumont said.

“Simon Moran, a good friend of mine, the Warrington owner; I like the way he works because he’s straight through the front door.

“He basically sent me a text saying ‘Bryson Goodwin’. If you get relegated the player can terminate just the same as you can. I’d turned down his first offer, I think it was 30 or 40 thousand, and the player has never played for me. Bryson is on six figures, all the bells and whistles like flights and whatever. Anyway, I said no, I was confident and I needed to improve the team.

“Anyway, we were on our way down to London and we needed to beat them by about 30 to guarantee we’d be at home in the Million Pound Game, irrespective of how Catalans and Widnes went. Simon, being the shrewd guy he is, knew there would be a figure that would test me. So as I’m driving down to London he just gave me a call and said ‘what if we made that figure 60?’.

“It was a tough gig then because the guy is on a big contract if he comes, I can get £60,000 guaranteed and find myself another player and we could get relegated and he go for nothing. As it turns out, it was the right decision, so I took £60,000 on a player who never put a shirt on for us. That has got to be my best deal!”

You can watch the full show here: https://www.totalrl.com/watch-this-weeks-rugby-league-back-chat-online-now-3/