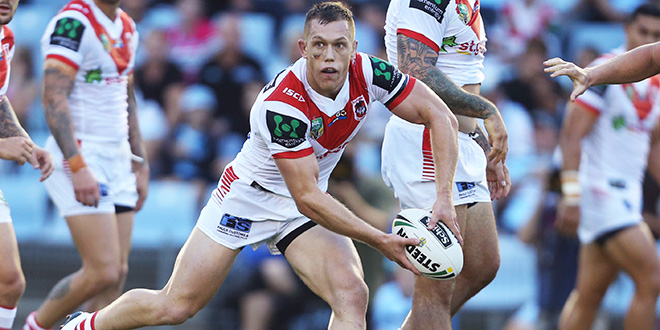 St George Illawarra Dragons revived their top-eight hopes with a comfortable 42-16 victory over the struggling Gold Coast Titans today at the UOW Jubilee Oval after they led 22-0 at half-time.

The Dragons made one change from their squad announced on Tuesday, with Kurt Mann replacing Josh McCrone at halfback, while Tariq Sims came into the starting side with Leeson Ah Mau dropping back to the bench.

The Titans also made one change, with Leivaha Pulu starting at lock and Max King moving to the bench.

The Dragons dominated the first half with tries from Kurt Mann, two from Jason Nightingale and one from Joel Thompson.

Cameron McInnes scored the Dragons’ fifth try on 48 minutes, with Widdop’s goal extending the lead to 28 points before the Titans stage a fighback with tries from Dean Copley and Anthony Don.

But the Dragons’ victory was sealed when McInnes touched down for his seond try on 63 minutes.

Pat Vaivai got a third for the Titans before halfback Mann scored his second four minutes from time.

On a miserable afternoon for them, the Titans suffered injuries to Kane Elgey (sternum) and Jarrod Wallace (knee).

The Dragons now face a crucial game in round 25 against the Panthers that could determine which of the two clubs secures a place in the play-offs.