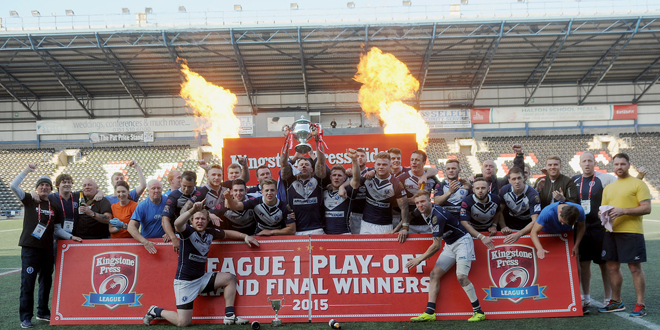 JOHN DUFFY paid tribute to the club’s off-field effort after his Swinton side hung on to clinch the second promotion ticket into the Championship.

Swinton’s pulsating 29-28 victory over Keighley secured promotion for the Lions in an unpredictable contest between two of League 1’s most entertaining teams.

“I called the early drop-goal from the side line as I knew it was going to get really tight in the end.” commented the Lions’ coach.

“We had a lot of possession near their line but didn’t want to try and kick the ball dead on the last tackle, which frustrated a lot of our fans I know, but they have a lot of speed on their wings and we didn’t want to give them a chance to use it.

“The last five minutes I could barely watch!

“It’s massive for the club – we are trying to change the club and make it more professional and there are a lot of people behind the scenes who do a lot for free, so this is for them.

“It’s also for the Chairman and a good board that he’s got around him who have gone out of their way to make things happen this year.”

For a full report of Swinton’s historic win, pick up a copy of League Express, in stores now.