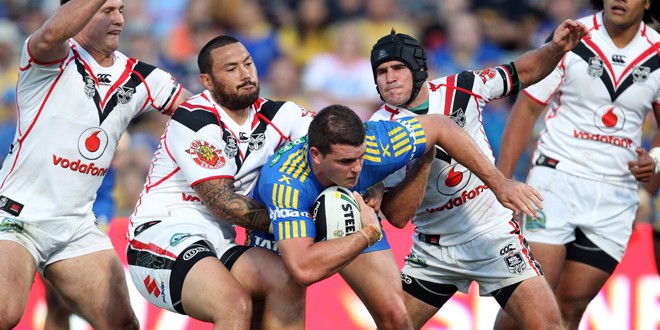 Parramatta did Sam Tomkins no favours on his NRL debut, with Eels stars Semi Radradra and Vai Toutai both scoring hat-tricks as they eased to a 36-16 victory at Pirtek Stadium

The Eels scored an early try from Fiji World Cup winger Radradra, and then Radradra set up a second for Jarryd Hayne, with Corey Norman converting the first to give the Eels a 10-point cushion.
The Warriors replied when Tomkins created a try for Glen Fisiiahi in the corner, but the Eels regained a 10-point margin when Toutai touched down after some crisp passing.
The game was characterised by a glut of penalties and dropped balls before a controversial eight-point try was awarded when Tomkins’ pass made a try for Carlos Tuimavave, whose nose was hit by Peni Terepo as he touched down. Shaun Johnson converted the try and added the penalty to leave the game finely poised, 14-12 at half-time.
In the second half Radradra and Toutai completed their hat-tricks, while Manu Vatuvei scored a try for the Warriors. Corey Norman and USA World Cup star Joseph Paulo (2) added goals for Parramatta.
Tomkins showed some nice touches but the Warriors made too many errors and conceded too many penalties to have a realistic chance of winning the game.
Full coverage with reports and photographs of all the opening round games from the NRL will feature in Monday’s Rugby League Express, available in shops and online at www.pocketmags.com