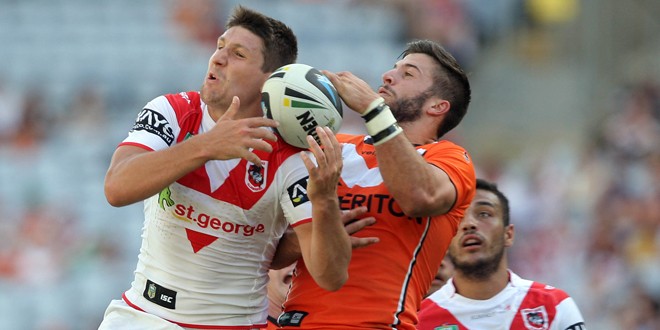 In a Nutshell
Gareth Widdop was the key man for St George Illawarra Dragons, as they defeated Wests Tigers 44-24 at ANZ Stadium in the opening round of the 2014 Premiership

How it unfolded
Widdop kicked eight goals and had a hand in four of the Dragons’ seven tries, as they overcame an 18-6 deficit after 20 minutes.
The Tigers had gone in front when Pat Richards, back at the club after spending eight years with Wigan, went over after just five minutes, with James Tedesco scoring a second try soon afterwards, with Richard converting both to give an early 12-0 lead.
Welsh international Tyson Frizell got one back for the Dragons, but Tigers’ captain Robbie Farah then shot over from dummy-half.
The Dragons then took over, scoring tries from Ben Creagh, Gerard Beale, and Michael Witt, back in the NRL from London Broncos, with Widdop converting all of them and adding a penalty.
The Tigers responded with a try by Martin Taupau, again converted by Richards, to restore a two-point margin.
But that was as good as it got for them, and the Dragons scored three more tries from Frizell, Rein and Quinlan to register a convincing win in front of 19,860 spectators.
Reports on all the Round 1 NRL games will feature in Monday’s Rugby League Express, available in the shops and online at www.pocketmags.com