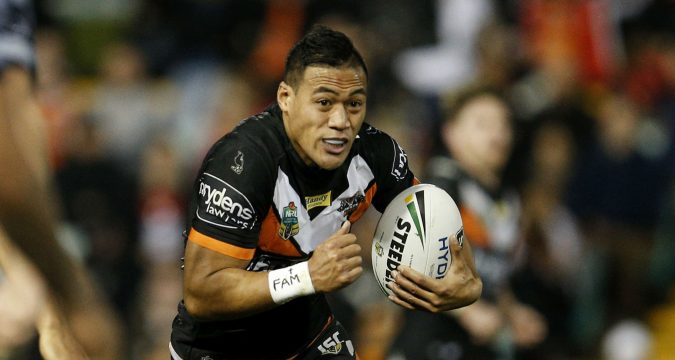 Both Hull Kingston Rovers and Toronto Wolfpack have had their efforts to sign Tim Simona quashed.

The West Tigers star is looking to kick-start his career after being banned by the NRL for betting against his own team earlier this year.

The centre has been offered opportunities to resurrect his career in the Northern Hemisphere, with the Hull Daily Mail claiming the Robins were keen to sign the 26-year-old while Toronto head coach Paul Rowley also confirmed his interest.

However, any hopes of a deal have been brought to an end as Simona doesn’t fit the criteria for a visa, as he has not played enough games for Samoa or Wests Tigers during the last two years.

It has caused further frustration for Rowley, who criticised the current eligibility regime in League Express earlier this year.

“We were told by the RFL he was a couple of games off making the criteria so we, nor any other English clubs, would be able to sign him,” he told NRL.com.

“You’re a human being and you have a talent so you should be fully eligible to find employment wherever you want. I don’t think we’re in a strong enough position as a sport to be so restrictive in our measures. It’s ultimately creating mediocrity at the top level in my opinion.

“It’s about managing people and I have a good record of bringing in people who are perceived to be troubled characters and bringing them into a happy environment and bringing the best out of people.

“Our environment is pretty good like that. You either fit in or you leave. I would have liked to have got past stage one and maybe give him a cuddle and take it from there. But that’s not going to happen now.”

Simona’s career now appears in serious doubt as a result.