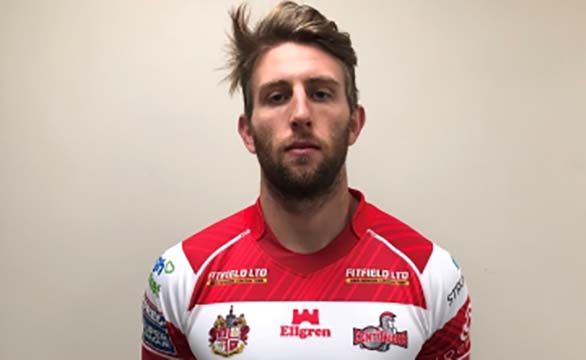 Brendan Elliot is hoping to make his Super League debut for Leigh Centurions next month as he closes in on a return from his knee injury.

Elliot tore his anterior cruciate ligament (ACL) playing for Manly last year and has yet to feature in a game for his new club.

The outside back landed in the UK in early March and says his injury rehabilitation is on track. He is targeting a return to the field before June.

“I’m getting stuck into my rehab as I’m injured at the moment. Everyone’s been really welcoming and I’m really enjoying the facilities and the club itself. I’m just really keen to get back and start playing.

“I did my ACL back in August. I’m only a couple of weeks away, but it’s a long process. It’s just something I had to get right before I can get back on the field. We’ve got a goal there in place. But a rehab is not always as straightforward as we would like.

“But we’ve got a goal and we’ll try and reach it, give or take a few weeks. It’s only a couple of weeks away. The last thing I want to do is come over here and be injured all year. I want to get it right and hopefully get some game time.”

Elliot debuted in the NRL with the Roosters in 2014. He played 14 games before joining Newcastle in 2016, where he made 23 appearances.

The 27-year-old spent the 2018 season with Gold Coast, playing just three matches, before spending the past two seasons with the Sea Eagles, where he made 25 appearances.

The Australian fullback, who can also play on the wing and in the centres, almost joined Leigh in 2018 but was unable to secure a release from the Titans.

“Playing in Super League has always appealed to me,” he said.

“I actually signed for Leigh back in 2018, but I had a few difficulties in getting my release and leaving the club I was with at the time. When the opportunity arose for the second time I grabbed it with both hands.”

Leigh have yet to get off the mark in Super League this season with four defeats after four rounds and are bottom of the table. The Centurions were also dumped out of the Challenge Cup by Huddersfield.

“It’s obviously tough watching from the sideline and seeing the team not doing as well as we hoped,” Elliot said.

“But in saying that, everyone’s super positive where we’re going and each we’re just trying to build on our last performance. It’s just about putting a full 80 minute game together.

“There are games there we’re we’ve closed off really nicely, or started really well, but we just haven’t put the full 80 minutes together. I think that’s the main focus and everyone’s on board with it, so now we just need to go out and do it. I’m really looking forward to getting back to playing and hopefully contributing to a few wins.”