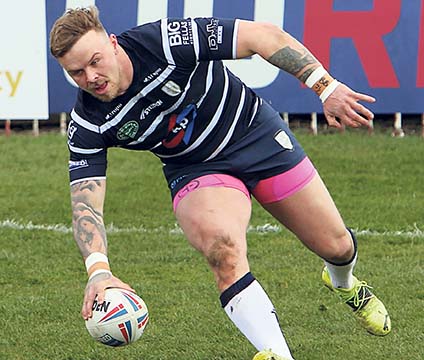 Featherstone Rovers winger Ben Blackmore will face an RFL tribunal over a potentially racist comment he posted on Facebook.

Last month Blackmore, a former Sheffield Eagles player, posted a questionable comment online about a picture of the Sheffield squad.

The 28-year-old wrote, “who’s the locked player?” in regards to a group photo of the Eagles players.

It is understood he was referring to Sheffield’s black winger Rob Worrincy, with the implication that on a computer game a character remains ‘locked’ if a certain level has not been reached, so their face is not lit up and is faded out of the picture.

The RFL has confirmed to League Express that Blackmore has been referred to an RFL Operational Rules Tribunal regarding his Facebook post of 17 March.

The tribunal’s remit is to consider the alleged posting of inappropriate material, including unacceptable language, in the form of discriminatory and disrespectful language based on race, national or ethnic origin.

An RFL spokesperson told League Express: “The date of the tribunal has yet to be confirmed. Ben has the right to a personal hearing and to call witnesses.”

Blackmore left Sheffield at the end of 2019 to join Featherstone. The winger scored 49 tries in 107 appearances for the Eagles between 2016 and 2019.

The photo of the squad was posted by Sheffield on its Facebook page on March 16 and Blackmore has since deleted his comment.

An Eagles spokesperson said: “The club is aware of the post, we have spoken with our squad and are in dialogue with the Rugby Football League also.”