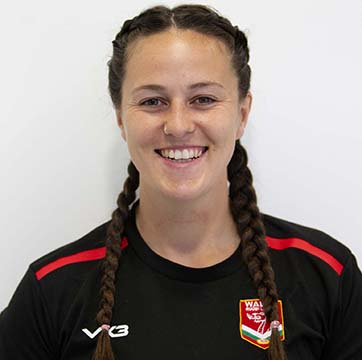 Ffion Lewis is looking forward to becoming Welsh rugby’s 100th dual code international when she runs out for the Wales Rugby League women’s international side this Friday against England at the Halliwell Jones Stadium in Warrington (kick-off 6pm).

The 24-year old is in great company. The first rugby union codebreaker was in 1908 when Dai ‘Tarw’ Jones played in the world’s first rugby league international between two countries, Wales beating New Zealand 9-8 in Aberdare. He’d previously played for Wales rugby union against the All Blacks in the famous 3-0 victory for Wales in 1905.

Since then, others like Lewis Jones, Kel Coslett, Dai Watkins, Tommy David, Jonathan Davies, John Devereux, Scott Gibbs, Scott Quinnell and Gareth Thomas to name just a few, have followed him, totalling 98 men who have pulled on the red shirt in both rugby codes.

Then Rafiuke Taylor, who had previously won five caps for Wales Women in rugby union, led the first ever Wales RL women’s side back in 2019.

With all of those famous dual code players to follow, one sticks in Lewis’s mind, that of her former Wales rugby union head coach.

“I wasn’t aware that so many players had played both codes for Wales,” she said. “It’s really amazing that I’m going to be on that list with so many incredible names. Rowland Phillips was my first head coach for the Wales women’s rugby union side and he presented me with my first cap, so to be on the same list as the likes of him, and to be the 100th player to play rugby union and rugby league for Wales, is something to be really proud of.”

The Haverfordwest-born half-back is also experienced on the sevens circuit for Wales, captaining the Welsh Universities in that code. Back in the 15-a-side version of the sport, she has turned out for Scarlets, Worcester Warriors, Gloucester-Hartpury and Exeter Chiefs as well as winning 14 caps for Wales, making her debut against South Africa in 2018 and then playing in two Six Nations campaigns.

However she wasn’t selected for the 2021 Six Nations and when an opportunity came to give rugby league try, she didn’t look back.

Lewis continues: “After I wasn’t selected for Wales in rugby union this year, the opportunity arose in League to try out for the side. I thought I’d give it a go and see how it went, and I’ve not looked back since. The transition of how I play as a number nine in union, and how I play in sevens, made the transition easier as to how I play in League.

“It’s a massive opportunity for us all as players and rugby league as a whole, the game being on an awesome platform like Sky Sports. We’ve built over the last few weeks as a squad and I think we’re in a really good position as a group to show everyone what we’ve worked really hard on.

“We want to win. We’re all competitive and we’ve got the talent to do so. We’ve all come together and worked really hard and we all believe we can do it. As long as well give one hundred per cent, we’ll come away pleased with ourselves.”

Following the Wales game, Lewis, who has signed for Rhondda Outlaws in the newly set-up Wales Women’s Rugby League, will also hope for success with new Betfred Super League South side Cardiff Demons, whose season starts next week. She has been dual registered with the club and they play four matches in a three-team league, with the top two qualifying for semi-finals.

“I’ve signed for Cardiff Demons and we’ve our first game coming up next week.” Lewis says. “It’s awesome what Betfred are doing for women’s rugby league in sponsoring this competition and expanding the competition so we can play the Golden Ferns from Bristol, Cornish Rebels and then maybe the likes of London Broncos or The Army if we get through to the semi-finals.

“Many of the girls in the Wales side have signed on for the Demons, so what we’ve built as a squad, we can take back to the Demons and do really well. After that, who knows? I’ve finished a really good season with Exeter Chiefs, they’re an incredible club and I’m proud to have played for them, but I’m started my new teaching job in Wales in September so I need to make good lifestyle decisions for myself going forward.”