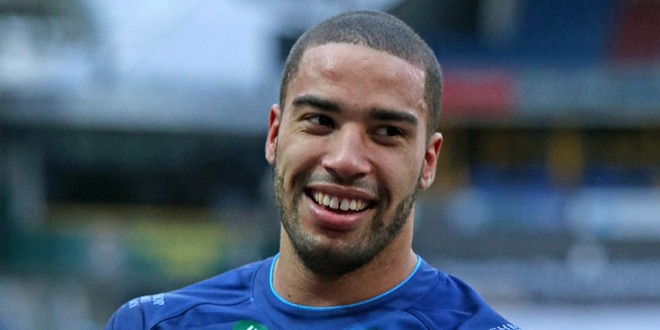 Omari Caro believes the reason behind his rapid change in form this season is down to the flying wing-man being happy away from the field.

The 2013 season was a difficult induction for the 23-year-old, as he adapted to life in the north away from his southern roots.

The Jamaican international’s confidence also took a knock when, in round four against Salford last season, he bombed a certain try that would have at least secured his team a draw. In the same game Caro popped his shoulder and was plagued by the injury from then on.

But, with seven tries in six games this season, the Hammersmith born speedster has started this year’s campaign in impressive fashion.

“I’m happy away from the field, which has meant that I’m performing better on it,” Caro told Total Rugby League.

“Last year was a big learning curve for me. Coming from London there’s not as much emphasis on Rugby League.

“I moved up here on my own away from my family and friends, and I didn’t settle well off the field. The big thing for me was adapting to my surroundings and getting used to things up here, which I have now.

“Now I’ve got that year’s worth of experience under my belt and I know how everything works with the expectations of the fans and the club. And after getting a couple of tries against Huddersfield I got the self-confidence that I can perform at this level against the best. Scoring tries is a winger’s job. It’s what you’re paid to do, and once you start doing it you become even more confident.”

Caro began playing Rugby League at the age of 17 and a year later he was picked up by the London Broncos after attending an open trial. He arrived at the Robins on a two-year-deal with the reputation of being Super League’s fastest man after clocking an impressive time of 10.2 seconds over 90 metres. This year he dedicated himself to improving his game during the pre-season.

“I came back two weeks early to get myself fitter and stronger, and that extra couple of weeks put me in good stead for when the boys came back in,” he added.

“It also helps when you’ve got the people around you that I have. This year, I’ve playing on the left, and having players like Kris Welham and Kris Keating speaking to me literally for the 80 minutes helps massively. It’s all constructive talk, letting me know what I have to do, and it goes a long way in the heat of the battle when you hear that calming voice.”