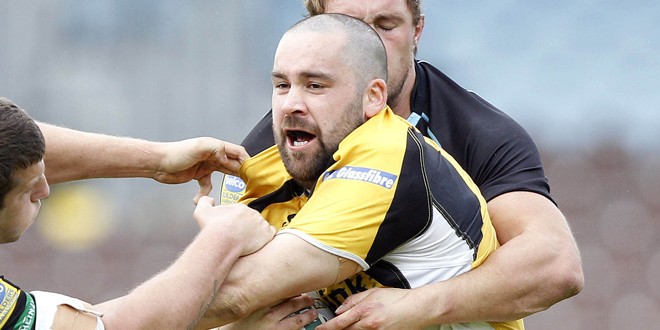 What is your favourite food?
I’d probably have to say a curry. I like a Tikka Massala, with naan breads, poppadoms – everything, the full mashings. I can only drink water with it.

What song do you listen to more than any other?
Right now it’s One Direction with the kids. Our little girl is obsessed with it. On game day I listen to stuff like Oasis, as I prefer to chill out a bit before a game. If you get too pumped you can use up all your aggression.

Which superpower would you most like to have?
Probably to be able to stop time, like Bernard’s Watch. When you’re having a good time it just keeps going. The first thing I’d do? Probably raid a bar or something like that, get some more beers while no one is watching.

What is your favourite animal?
Dog. I don’t have one at the moment but I grew up with one. My mum and dad have still got a Rottweiler, nice and relaxed and good with kids.

What is your favourite colour?
I’ll go with blue. Amber and black are obviously the Castleford colours but I’ll stick with blue.

What year would you go to in a time machine?
Maybe go back to ‘66 when England won the World Cup. I would imagine that was quite a good year to be in. A once in a lifetime thing. I follow the Premier League a bit, but I wouldn’t say I’m a big fan of football. If I had to pick a team it would be Leeds.

What scares you more than anything?
I have a dislike of wind. Just the weather – not bodily! I live in a three-storey house and it just seems to pound my house all the time and it just gets to me. It’s a bit weird, I don’t like it. It keeps me up at night. It’s quite windy now and so I’m not keen on it.

It’s my round, what are you drinking?
I always start with a lager then move on to a vodka, lime and lemonade. When I was younger it used to be JD and coke.

What is your favourite time of year?
Christmas is pretty good with the kids being so excited and seeing their little faces. And birthdays. I have a little girl, six, and a little boy, two. When we had our little boy it was the day after I broke my kneecap so that was pretty stressful. We had him on the 23rd and I did it, I think, on the 25th on Easter weekend so I saw him the day before then I didn’t see him – both kids in fact – for five days after that, which was pretty tough.

If you could choose to stay a certain age forever, what would it be?
To be honest I would probably go back to being a kid with no cares, no hassle. I’d probably try harder at school as well!

TV or a film?
TV. On series link at the minute I’ve got Coronation Street, World’s Strongest Man, and I’m into documentaries, like Goldrush and stuff like that, and Deadliest Catch.

Tidy or messy?
I’d say a bit of both. I get told off all the time for leaving clothes on the bedroom floor.

Any bad habits?
I bite my nails.

What was your first thought this morning?
I need the toilet!

Do you have any hobbies?
I do a bit of coaching. I had a go at golf but was terrible at it. I don’t do much besides sorting the kids out!

Who is your favourite fictional character?
I’d have to say Homer Simpson. He’s just a cool guy, does what he wants and likes his beer.

What did you do for your first job?
Before I went full-time after leaving school I worked at Asda for about three or four months. It was alright actually, a pretty easy job. I had a laugh with the lads. We just used to stack as many trolleys together as possible and see if we could push them, hitting the occasional car!

What is your earliest memory?
I can always remember playing when I was younger. I started when I was four and I can always remember bits and pieces of games. I remember watching in 1992 when Castleford beat Wigan and we were stood outside the Civic Centre and the players did a parade. There was a lot of people. I’d have probably been about six.

What is the greatest moment of your life?
Probably having kids. After that I’d say getting married. Career-wise I’d probably say getting promoted back in 2005. That was quite a big year for me, when I was playing first-team regularly. It was a good achievement and the parties after the games were pretty good as well.

Who is your best friend in the game?
I get on with all the lads. I’m pretty good mates with Ryan Boyle and Joe Westerman. Westerman’s missus and my missus are good friends and have kids the same age. It’s the same with Boyley.

Which pro has the worst dress sense?
It’s a tough one because it’s heavily debated at Cas, and a few of the boys go on at each other all the time. There’s Jake Webster, Jamie Ellis and Adam Milner. I’m not too sure, I’m not really a fashion guru myself. Webster always wears Timberland boots, he loves them. Adam and Jamie think they’re fashion icons.

Funniest player you know
Shenny and Lynchy [Michael Shenton and Andy Lynch] are probably. They are not funny all the time, but they are always stirring stuff up and trying to get people to have a go at each other. We have a messaging group and they’ll put something controversial down just to get everyone having a bit of banter. They’re always starting fires and once there’s a big debate going they just sit back. They’re a bit sly.