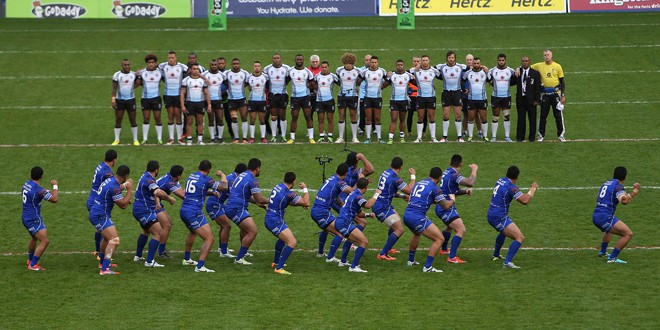 Fiji and Samoa held on to win their Pacific Test matches against Papua New Guinea and Tonga respectively in front of 12,336 boisterous fans at CBus Super Stadium today.

In the first game of the double-header Fiji defeated PNG 22-10, while in the second the Samoans just held on to beat Tonga 18-16 on a day that had all the coaches of the four competing sides demanding more Test matches, while their performances augur well for the World Cup in Australia and New Zealand in 2017.

In the first game Fijian winger Marika Koroibete scored twice in the first half as the NRL experience of the Fijian team took advantage of PNG errors to open up an 18-0 lead at half-time.

The Kumuls worked their way back into the contest to trail 18-10 before Fijian centre Fabian Goodall pinched a 60-metre intercept to kill off the PNG surge.

The second game was highly competitive throughout and the highlight was an incident two minutes from time, with the Tongans trailing by two points.

As Tongan winger Jorge Taufua set sail for the south-east corner for what would have been his third try – and the match-winner – Samoan forwards Sam Kasiano and Frank Pritchard pulled off an amazing cover-defending tackle to push Taufua into touch and win the match for Samoa.

Full reports and photos from both matches will feature in Monday’s Rugby League Express.