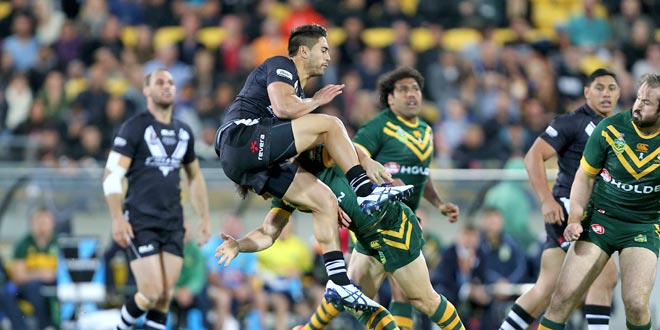 New Zealand have beaten Australia 12-26 in the Anzac Test at Suncorp Stadium today.

The match was originally scheduled for Friday night, but heavy rain in Brisbane flooded the Lang Park complex and forced the Rugby League authorities to delay the game by two days.

And the Kiwis adapted well to the delay, securing their third successive victory against Australia for the first time since 1952, with current Golden Boot holder Shaun Johnson having an outstanding game, and Manu Vatuvei, who scored two tries, being named as the man of the match.

The Kiwis took an early lead with a penalty by Johnson before Sam Thaiday touched down for the Australians, with Johnathan Thurston adding the goal after 12 minutes.

The Kiwis levelled the scores nine minutes later with Vatuvei’s first try, with Johnson missing the conversion, but they took the lead after 27 minutes when Vatuvei touched down for his second.

And when Johnson scored a try and a goal on 32 minutes the alarm bells were sounding for the Australians, with several of their star players, including Greg Inglis, looking out of sorts.

Johnson added a penalty two minutes before the break, and then converted Shaun Kenny-Dowall’s try right on half-time to give the New Zealander a shock 6-26 lead at the interval.

In the second half, although they didn’t score again they mounted a superb defensive effort, which the Australians could only breach once when Will Chambers scored after 58 minutes, with Thurston adding the goal.

Kenny-Dowall had a second try disallowed right on the final hooter, but by then it didn’t matter, and the Kiwis had registered a victory that will give a massive boost to this autumn’s Test series when they visit England.

A full report and photos from this match will feature in Monday’s edition of Rugby League Express.