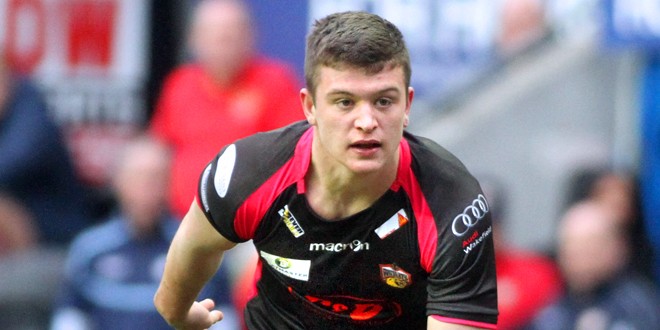 Wakefield have secured the services of England youth star Jordan Crowther, who became the second youngest forward to represent the Wildcats against Wigan last week.

The 17-year-old, who played his amateur rugby at Westgate Wolves, came through the Wakefield academy where he was part of the unbeaten under-16s squad in 2013. He has signed a four-year deal that will see him remain at the Rapid Solicitors stadium until 2017.

“It’s the only club I’ve ever wanted to play for since I was young so to get a long contract is great,” he said.

“It’s been a crazy year to go from playing amateur and one Academy game, straight to playing against the Champions. It’s just crazy how time goes by. It’s a dream come true job – it’s what I used to do as a hobby after school and now I’m getting paid to keep fit and do something I love.

“I just want to keep pushing and train as hard as I’m doing. I’d like to make a few more appearances this year if I could but that’s all down to how I train and how hard I work.

“There were just short of 12,000 there [at the DW Stadium] so there’s no better place to make your debut.

“As soon as I took the first drive and made my first tackle it just all fitted into place and sunk in a bit. People like Ali Lauitiiti and Danny Kirmond are probably the main reason I’ve come this far. Getting knowledge and experiences from them has been big for me.”

Coach Richard Agar added: “We think he’s a player of immense promise. The improvement in him and Max Jowitt has been terrific in terms of their physical development, their skill development and their attitude to becoming full-time players.

“Jordy showed last week that he’s fearless. He got hit hard a few times but he kept coming and he got through the line a couple of times and he’s a kid that, for such a young age, is absolutely fearless.

“What makes it a little bit nicer is that he’s a Wakefield fan. We’re getting a kid that was on the terraces and some of these blokes over the last two or three years have been his heroes and now he’s playing amongst them and doing a really good job of it.

“He’s a tough kid, he’s always got a big smile on his face, he’s willing and eager to learn and we think Jordan and Max [Jowitt] are players of real potential. For all his ability, he’s a genuinely nice kid and that counts for a lot when you’re coming into a senior group and all the guys have got a lot of time for him.”