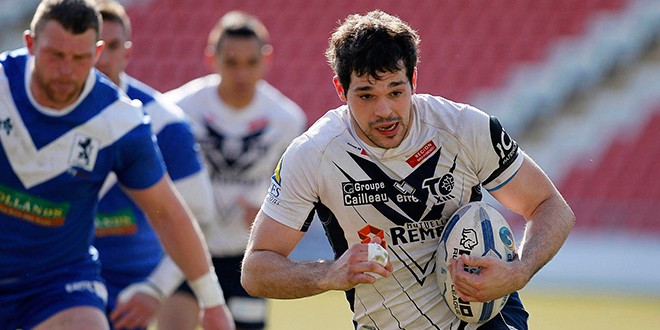 French Rugby League roundup: Toulouse continue to frustrate their supporters as they let slip a 20-10 half-time lead to go down 38-26 at home to St Estève-XIII Catalan.

After losing last week at bottom club Avignon, Toulouse appeared to be making amends by taking control of a testing game against the Catalans, who, it must be said, included a number of players with Super League experience, including second-rowers Cyrille Gossard and Sébastien Raguin, World Cup halfback William Barthau, centre Jean-Philippe Baile and winger Damien Cardace.

Though St Estève struck first through Cardace, Toulouse scored four tries in the latter part of the first half, when Florian Quintilla, Aaron Wood and hooker Mourad Kriouache all went over. In front of a 1,500 crowd, the Catalans hit back strongly after the break, posting five tries to one. Centre Rachid Ahlalou, Gossard, scrum-half Dan Yates (twice) and Cardace again all helped tighten the Catalans’ grip on the game, while Toulouse’s only riposte came from winger Kuni Minga.

Former international prop David Ferriol, with two tries, led Limoux’s fightback against Carcassonne in an absorbing local derby watched by a crowd of over 3,000 fans.

Centre Troy Savage and stand-off Maxime Grésèque both touched down in the first six minutes to give Carcassonne the best possible start until Ferriol powered over, later emulated by fellow front-rower Lee Jewitt, to bring the half-time score to 14-12 in favour of the visitors.

Early in the second half a sweeping Carcassonne move ended in a try for Clément Soubeyras and a six-point lead. But with a more substantial bench, Limoux began to stamp their authority on the game as Marvin Filipo brought the scores level before Ferriol proved unstoppable on his way to the line.

Despite promising ASC moves which could have brought tries for Vinnie Anderson and Soubeyras, Limoux halfback and captain Mickael Murcia, who converted all five tries, once again proved equal to the situation, controlling play with his kicking, adding a penalty and a field goal, and creating a late try for Mathieu Mayans. Thus Limoux remained unbeaten at home with a 33-18 victory which also saw them stretch their lead at the top of the table.

A crowd of 1,700 saw Lézignan increase their chances of a top-four spot with a convincing 28-0 win at Palau, where there have been some surprises this year. The FCL made no mistake, running in two tries in the opening six minutes through fullback Tony Duggan and centre Cyril Stacul and going further ahead when winger Fabien Poggi crossed towards the end of the first half. Second-rower Dustin Cooper and Maxime Benausse, coming off the bench, both touched down in the second half to maintain Lézignan’s dominance.