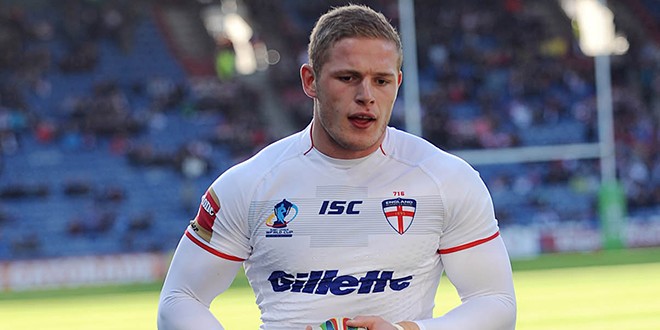 What is the best meal you’ve ever had?
I’m quite partial to our ritual feed the night before a game. Sammie [brother Sam] cooks up a big spag bol feed. It’s not original but it’s definitely my favourite.

What song do you listen to more than any other?
I’m a bit soppy at the minute; been listening to Ed Sheeran and plenty of James Morrison. And a bit of One Direction when I’m feeling like it, to mix it up a bit.

Do you have any superstitions?
Just the spag bol! I’m pretty particular about that.

Which superpower would you most like to have?
I’d have to say fly. So I could get around easier and not have to get on planes.

What is your favourite colour?
Red. Always has been. I used to have red boots when I was younger. My twin brother had blue boots so they could tell us apart.

It’s my round, what are you drinking?
Probably a Corona. I like to start off with that.

Summer or winter?
That’s easy – summer every day. Get down the beach!

What is your favourite animal?
I love lions. They’re powerful aren’t they. And leaders of the pack.

Greatest moment of your life
Pretty recent really, playing with all my brothers for South Sydney was a really special moment. And representing England against Australia with two of my brothers was a great moment too. We don’t give Luke stick for not making the England team, he was gutted. He had a tough year injury-wise. It would be a dream to get all four of us in the England team. That’s definitely on the to-do list.

TV or a film?
Quite into some TV series at the minute. Homeland and Game of Thrones – loving all those. I download them onto my iPad and watch about five in a row.

Any bad habits?
I breathe really loud without even noticing. I’ve got a knackered nose. Everyone thinks I’m snoring but that’s just the way I breathe.

Tidy or messy?
Bit of both actually. I go through stages where I’m untidy then give myself an uppercut and sort it out.

What is your first thought on a morning?
What am I having for breakfast? Sort that bit out first then look for my phone, see if I have any messages.

Do you have any hobbies?
Catching up with my mates, going out for a coffee. Like to play a bit of golf now and then, too, but I’m not the best. The best golfer on the England team is probably Sam [Burgess], he plays off a 10 handicap but he has been as low as five or six.

What was your first car like?
I don’t drive. I’m yet to have a first car. I’ve not quite passed my test yet. My twin brother Tom passed his test when he was 17 so it’s probably why I’m a bit lazy with it.

Who is your favourite fictional character?
The dad off [US TV series] Modern Family [Phil Dunphy, portrayed by Ty Burrell]. I love that guy, he’s cool. He is my idol.

If you could meet anyone living or dead who would it be?
I’d love to meet Michael Jackson. I think he was really talented so I’d love to hear him sing once more.

What did you do for your first job?
When I was in school I had a milk round from 2.00am-7.00am in a morning. It was pretty tiring, and then when I finished school I worked at Nando’s for a bit – I was the head griller there. I did a few jobs actually; I was a bricklayer for a bit too.

What is your earliest memory?
Probably the first time I started playing rugby. Dad took Tom and me down to training and I can remember busting my nose open and bleeding loads, and I was like what’s going on here, I don’t want to be playing this. I ended up loving it after that.

Dogs or cats?
Definitely dogs. Got two myself. Love them, especially Labradors. I miss them.

Funniest fellow pro
Bennie Westwood has us in stitches; he’s an absolute character. He comes out with funny quotes all the time, from films like ‘Rita, Sue and Bob too’. He’s a proper Normy (Normanton) lad.

Who has the worst dress sense?
James Graham is up there I reckon. He sticks out like a sore thumb in Australia, he looks like a classic English tourist with his fishing hat on and a T-shirt tan. It’s funny.

What do you hate more than anything?
Seeing the Aussies win.