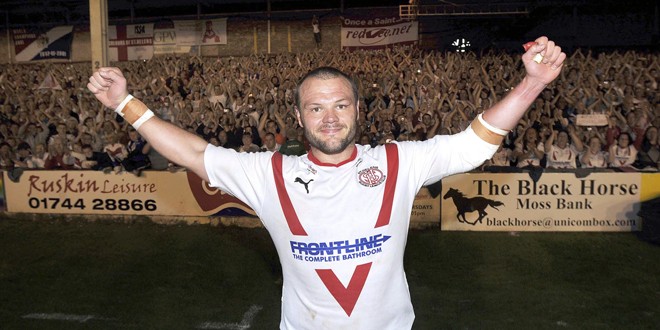 The Friday Flashback is a weekly feature that takes Friday night’s televised game in the Super League, and asks our followers on Twitter for their favourite clashes between the two sides over the years.

This week, we take a look at clashes between the two sides who currently occupy the top two spots in Super League 2014 – Castleford and St Helens. There have been some amazing clashes between the two sides in the modern era – with plenty of history entrenched amongst them. Here, TotalRL.com takes a closer look at some of the games you suggested to us.

Castleford 16-58 St Helens, February 4th 1996
Perhaps not the most flattering of scores to begin with, but this Challenge Cup tie from 1996 features an incredibly memorable moment from one of the all-time greats of the English game.

With Saints already comfortably out of sight and heading for round five, Steve Prescott lit up Wheldon Road with an outstanding try, going the full length of the field in a play that almost encapsulated Prescott perfectly. Although the game was done, it was arguably the most magical moment of the game – indeed, it was something the people who suggested this clash described as ‘magic’.
Did you know: That year, St Helens and Shaun McRae would go on to win the cup, and win the first ever Super League competition. However, they lost the Premiership Trophy Final to Wigan Warriors at Old Trafford.

St Helens 40-30 Castleford, 4 September 2010
2010 saw the final ever season of rugby league at Knowsley Road – and the King of St Helens signed off the league campaign in remarkably fitting fashion.

Castleford were the opponents for the final ever regular season game to be held at the stadium, and they were already trailing 34-30 before a magical moment occurred. With just nine seconds left on the clock, hooker Kieron Cunningham barged over in trademark fashion to score the final try in a league match at Knowsley Road. That try also ensured Saints were able to return a week later, as their points difference just beat out Warrington’s.
Did you know: Cunningham would again score for Saints at Knowsley Road, this time in the final match of any kind at the famous old ground, their 42-22 victory over Huddersfield Giants to qualify for the Grand Final.

It was a clash similar to the one we are witnessing in 2014, where the winner advanced to the top of Super League with victory. And Foster’s nerves of steel ensured that the Saints were the team to triumph against their opponents, as his faultless effort with the boot send the home crowd wild after Francis Meli’s try levelled matters up.
Did you know: Foster would finish the top points scorer in the entire division that season, with a stunning 402 points, 20 in front of Pat Richards (382).