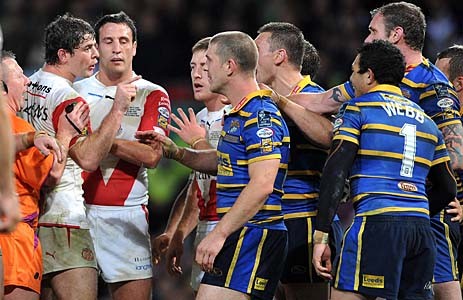 The Friday Flashback is a weekly feature that takes Friday night’s televised game in the Super League, and asks our followers on Twitter for their favourite clashes between the two sides over the years.

This week we feature two sides who have some titanic tussles from down the years – Leeds and St Helens. The Super League history between the two is rich, to say the least – they have contested four Grand Finals against each other. And even in the regular season, there have been some absolutely fantastic clashes between the teams. So, to warm up for tonight’s mouthwatering clash, let’s look back at some of the very best games between Saints and the Rhinos, as suggested by you!

St Helens 30-26 Leeds, April 6 2002
Our first flashback goes back 12 years, to 2002. It was a season that would ultimately see the Saints finish top of the ladder, and Grand Final winners, as they edged past Bradford Bulls at Old Trafford. Ian Millward’s men had won four of their first five games, and were made to work hard to overcome an excellent Leeds side.

The Saints were fine artists in mastering a great escape to snatch victory at the death, and they did so again to send Knowsley Road wild. With the Rhinos clinging onto a 26-24 lead, Saints captain Chris Joynt sent Anthony Stewart racing away to cross in the very last minute, and snatch a dramatic victory for Millward’s side.
Did you know?: Only one member of that Leeds 17 from the day is still playing for the Rhinos at present: Rob Burrow.

Leeds 70-0 St Helens, 23 July 2004
Danny McGuire and Marcus Bai both grabbed three tries each, as Leeds posted 12 scores to demolish St Helens. It was a year when the Rhinos would go on to win the Grand Final, again overcoming the Bradford Bulls, as they finally etched themselves into Super League’s elite.

And this clash at Headingley Carnegie was all about the Rhinos, as the likes of Wayne McDonald, Richie Mathers and Keith Senior also crossed on a memorable afternoon for the Rhinos. It was a feat made more impressive by the fact that scrum-half Andrew Dunemann had to pull out just minutes before kick-off, due to a stomach bug.
Did you know?: This was the very first time Super League history that the Saints were nilled. It was also the game where Danny McGuire equalled the then-record for tries in a Super League season – 28, set by Paul Newlove.

Leeds 18-10 St Helens, 10 October 2009
Leeds made it three Grand Final victories in a row, as they once again denied St Helens in the biggest showpiece of the year. This was the third Old Trafford showdown between the sides in as many years and, although it was arguably the closest, the Saints still could not get over the line against their now familiar foes.

Kyle Eastmond scored all ten points for the Saints, with a try and two goals. However, scores from Matt Diskin and a brace from Lee Smith ensured it would be Leeds’ trophy again for a third year running, with Harry Sunderland winner Kevin Sinfield inspirational throughout.
Did you know?: Each and every try in the game had to be awarded by the video referee, with Steve Ganson referring upstairs for all four scores.

St Helens 46-6 Leeds, 25 March 2012
Super League champions Leeds were trounced by a resolute St Helens outfit, who responded to the sacking of coach Royce Simmons in emphatic fashion. Ade Gardner, Jonny Lomax and Gary Wheeler all bagged themselves two tries, as the Saints dismantled an out of sorts Leeds side.

It was a disappointing afternoon for the Rhinos, who were without Danny McGuire and Brent Webb due to injury. The Rhinos offered a debut to youngster Stevie Ward, but he couldn’t prevent a dismal afternoon at the office for Brian McDermott’s men.

However, in the grand scheme of things it mattered little, as the Rhinos went onto win their second straight Grand Final.
Did you know?: This was the infamous game where Leeds dyed their hair red for Sport Relief. As it turns out, the Rhinos were ultimately left red faced.