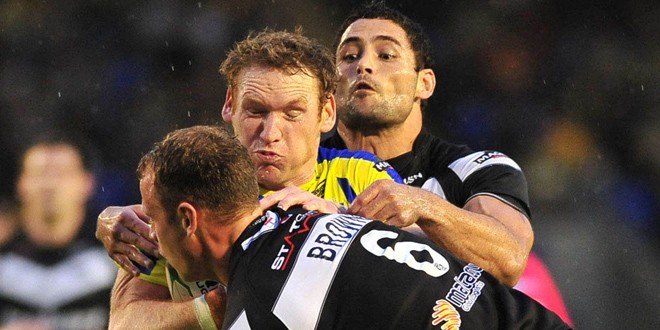 In a nutshell
Warrington put in a polished and impressive display to thoroughly outclass Widnes Vikings in front of a strong crowd at the Halliwell-Jones Stadium.

How it unfolded
4’ – Gareth O’Brien opens Warrington’s account for the day after powering over from close range, via the video referee. Chris Bridge lands the conversion: 6-0.

11’ – O’Brien involved again, this time putting in a superb kick that finds Joel Monaghan on the wing, the Aussie making easy work of the grounding. Bridge converts from the touchline: 12-0.

17’ – Widnes knock on at the play of the ball and present Warrington with an easy chance, which Michael Monaghan takes full advantage of, pouncing over from dummy half. Bridge adds the extras: 18-0.

26’ – Paddy Flynn has a try ruled out by the video referee. Chasing a grubber, he beat two defenders to the ball but couldn’t ground the ball.

28’ – Matty Russell puts in Rhys Evans but it is ruled out by the video referee for obstruction.

36’ – Mickey Higham cuts through the Widnes defence like a hot knife through butter and finds Chris Bridge who goes under the sticks, then slots the conversion: 24-0.

45’ – Rhys Evans gets the try he probably deserved in the first half. A long pass from Gareth O’Brien hits the floor then bounces up for the winger to cross in the corner. Bridge misses the touchline kick: 28-0.

48’ – Danny Tickle intercepts to stop a certain try and Widnes get great field position as a result. They fail to take advantage, though.

56’ – Ben Currie pounces on his own grubber after the Widnes defence fail to deal with it. With Bridge getting treatment, Stefan Ratchford takes kicking duties and slots one from the sideline: 34-0.

65’ – Warrington are over again! This time a storming run from Chris Hill sets the foundation and allows Atkins to offload to Trent Waterhouse, who passes the Evans on the wing for his second of the game. Ratchford pulls the conversion wide: 38-0.

76’ – Paddy Flynn goes over for Widens’ first try. He bravely weathers a storm of Warrington bodies to go over in the corner. Danny Tickle adds the conversion: 38-6.

79’ – Ben Evans steals the ball from Hep Cahill and passes to Ryan Atkins, who sprints 20 yards to put the final nail in the Widnes coffin. Ratchford goals in front of the sticks: 44-6.