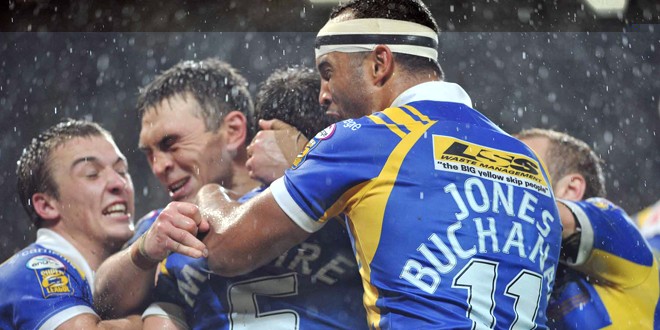 Happy New Year to all our readers! In order to celebrate the start of 2014, here are my wishes for the year.

1 I’d love to see Wigan go down under in February and win the World Club Challenge, as they did so superbly in 1994. On that occasion they were too good for an outstanding Brisbane Broncos side, but can they repeat that feat against Sydney Roosters? Their preparation will have been excellent but, unfortunately, I think the Roosters will just be too strong for them. I would love to be proved wrong though! The minimum we should be hoping for is that it’s a competitive game, as I think we need to see this fixture played in Australia more often.

2 Biased as I am, I’d like to see Leeds Rhinos get back to winning ways by lifting the Challenge Cup at Wembley in August, topping Super League in September and winning the Grand Final in October. They still have all their big names who have led them to so much recent success, so do they have one last hurrah in them?

3 It’s time for my other old club, Hull FC, to finally get back up there in the hunt for honours. Expectations have been lowered in recent years and there were fans who thought that last year’s efforts were good enough. They weren’t, and they let themselves down far too often. They are capable of making the top four, and that should be the minimum target for 2014, especially with a coach like Lee Radford in charge. I think they’ve made an excellent appointment there. I’ve certainly got no time for the Chairman Adam Pearson, who spat his dummy out with me last year for criticising some terrible performances, but I still hope they have a good season.

4 I wrote this last year, and I make no apologies for writing it again. Referees have got to grow some balls and stop relying on the video referees and the on-report system. Their indecision is ruining the game, and the constant use of the video-refs became a farce in the World Cup. I’d also like them to lose that daft headgear with the camera that makes most of the viewers seasick!

5 It’s time for the RFL to get shut of ClubCall, which absolutely nobody in the game respects. It’s an absolute gimmick and I can’t believe that it has any supporters at all. It makes a mockery of Super League at the most important time of the year, and, although it will remain for 2014, I’d love to see an announcement that it will be scrapped from then on in.

6 The other change that’s needed in the play-offs is for it to go back to five teams. It’s been proven quite conclusively that eight teams is far too many, and often the teams occupying the lower positions have nothing to give when the knock-out games begin. It’s not right to reward such mediocrity. The quality and attendance figures since the move to the top eight have both declined sharply.

7 It would be great if the RFL would finally announce that promotion and relegation will be re-installed for the 2015 season. This has got to happen before any further damage is done to the clubs outside Super League. The quality of clubs in the bottom half of Super League is also a massive concern. Licensing was supposed to strengthen them by giving them time to build a business plan without the fear of relegation. It’s failed. The lower clubs look as weak as ever to me. Either way, at least bring back promotion and relegation for some excitement.

8 This one is very much on the cards, but I can’t wait to hear officially that a Great Britain tour is going to go ahead in the near future – in 2015 if the whispers are correct. It will be wonderful to see the Great Britain jersey dusted down again and, to those of us who love the game’s heritage, it will be great to see the Lions in action once more. But I hope it’s a proper tour, with a three-Test series against Australia for The Ashes and then against New Zealand. There should also be matches against Papua New Guinea and the leading NRL sides. The decision to scrap Great Britain is still hurting the game. Scotland, Ireland and Wales could have all had stronger sides in the World Cup if Great Britain hadn’t been scrapped.

9 Sky really need to get rid of Phil Clarke’s endless statistics. To the average fan, they must appear confusing and not relevant, and I’d bet that 95 per cent of the viewers just aren’t interested.

10 I wished for this one last year too, but I hope that there are no coaches sacked in 2014. If someone deserves it, then I may still mention it in a column, but I hope not to have to do that.