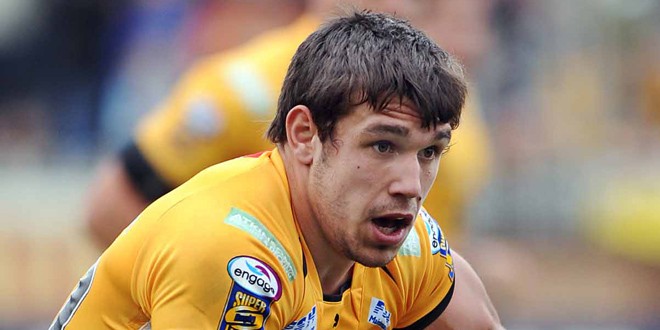 Moore, 25, was released from his contract at the NRL club half-way through a two-year deal that saw him make just six first-grade appearances.

His career began with St Helens, where he made his Super League debut in 2004 as a 16-year-old, and has included spells at Castleford, Huddersfield and Widnes.

“He’s really looking forward to coming back to England and proving his ability again,” said Broncos assistant coach Sean Long, who was friends with Moore in their St Helens days.

“He’s had a tough time of it the last 18 months or so and he can’t wait to get back into the fold and play in Super League again. He’s excited at the challenge.”

Solomona, 20, has been described by leading Australian journalist Phil ‘Buzz’ Rothfield as ‘freakishly talented’ and ‘faster than Billy Slater’. Oxford-born Griffin, 21, has experience in Australia playing for the Queanbeyan Kangaroos – the feeder team to the Canberra Raiders – and has made 20 Super League appearances.

Long is happy with his side’s early signings but is very wary of the challenge they face. He said: “We are looking forward to the season ahead, it’s going to be a very tough one.

“Every team has improved on paper and the league is going to be really tough again. I believe anyone can beat anyone on their day and we will be hopefully trying to knock one or two of the big teams off.

“We know we can beat anyone on our day.”

The former Great Britain halfback realises his side will be up against it in 2014 but he says they relish being underdogs.

“It doesn’t really matter if everyone has written us off,” he said.

“If you’re written off from the start no-one is expecting any shocks, they think you’ll be beaten by 60 points every week.

“It’s all about putting in good performances for us this year, and if we get some wins that will come along the way. Everything is against us, we have no team, it’s the middle of January now, we’ve moved grounds, we’ve changed facilities, all of Super League is against us. I don’t mind that – I prefer to be the underdog and I like the way the odds are shaped.”

The 37-year-old signed a 12-month contract at the Broncos earlier this month and would like to put the club’s financial issues behind him.

“We got the green light saying we’ve got 12 months in Super League, so it’s exciting times for us with a brand new team.

“The players were very nervous at first; they thought there wouldn’t be a club at all, but now we’ve got the good news everyone is on a bit of a buzz, a bit of a high, expecting the new players to arrive.

“We’ve moved from East London to Barnet, North London and the facilities are fantastic and so is the stadium.”

“He thinks about rugby all the time and thinks outside the box a lot. He picks me up for work every morning – I don’t know London that well – we get a coffee and have a good chat. We are on the same wavelength. He has a smart footy brain.”

When asked if he sees this role as a stepping stone to a permanent head-coach position, Long didn’t get ahead of himself.

“I’d love to be an assistant down at the Broncos for a while,” he said.

“As long as we finish out of the bottom two we will be happy, that way we will be in Super League again and that’s what I want, I want to be with Tony for as many years as possible.

“I had a spell [being a head coach] at Featherstone for nine or ten weeks. I really enjoyed that. It was only part time but it was a nice taste of it. Featherstone was a brilliant club for me, and the players and fans were fantastic.”

Long explained how he is now moved into a property in the capital and he has “a kettle, microwave, my iPad is set up for the music – what more do you need?.

“I’m not missing home one bit,” he said.

The Broncos have lined up a friendly away at Catalans Dragons on 25 January and at Leeds Rhinos on Friday 31 January. They are unlikely to play any other first-team games before the big kick off at Widnes on 16 February.