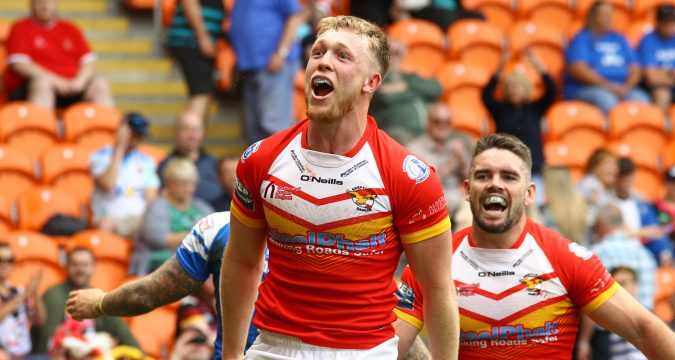 I really enjoyed watching the Blackpool Bash on Saturday.

There was a lot of talk earlier in the year about the viability of the Bash, with Hull Kingston Rovers and Bradford Bulls no longer in the Championship, and with three clubs near the top who would bring few supporters.

But I’m a big fan of these concepts and I thought Saturday was great. The rugby was superb, and the atmosphere came across very well.

I wasn’t in Blackpool and watched the games on Sky Sports. The Magic Weekend and the Blackpool Bash are tremendous for television.

But I have to say that it is really poor from Sky that they won’t show more of the Championship. With so many sports channels, there’s no excuse for not having at least one game per week.

The plus side of that, however, is that when the Blackpool event comes around, the players seem to lift because it’s the one time a year that most of them will be on the telly.

I’ll start with the titanic match between Toronto and Leigh, which was the last game to be played on day one.

What a fabulous game. It looked like Leigh were home and dry, both at half-time and when they built up a three-score lead midway through the second half, but the Wolfpack showed what a top side they are in coming back.

They let themselves down big style at Warrington, so credit to them for putting that right. Leigh may not be in the top four with them, but they knew that on current form, Leigh are also the real deal.

The ending was pure theatre with the missed penalty goal and then the bizarre scenes at the end when the two coaches appeared to have an on-field disagreement.

And that’s all assuming Leigh do end up in that competition, as they aren’t even in the top four yet!

Elsewhere on day one, Barrow just weren’t at races for the first half-hour of their game against Sheffield.

At whatever level of the professional game, you will get turned over if you don’t bring your ‘A’ game. Even if you mount a comeback, you’ll have used too much juice in the process and you’ll probably still come up short, as the Raiders did.

Sheffield deserved their win. I’m not generally a big fan of their style of play, but they played some smart Rugby League on Saturday and were the better side.

Cory Aston was very good with his hat-trick and his good organisational skills. As you would expect from a Mark Aston side, the Eagles graft for each other and were well worthy of the two points.

Barrow are having a decent season, so they will be very disappointed not to beat Sheffield. Some of the big players let them down, but I thought Jamie Dallimore and Ryan Fieldhouse did well. If the right attitude had been there for the whole game, they would have won.

I really enjoyed the game between Halifax and Featherstone where, once again, Scott Murrell was the difference.

Murrell always does Featherstone at the Bash. He’s sheer quality at this level and is a pleasure to watch. You can see him plotting and deciding when to inject himself into the attack. That’s how all halfbacks should play. He was the difference between the sides.

It was a great game and the result was down to one man. You can see he still enjoys his rugby and that’s great to see. And as I said to him on Twitter on Saturday, he’ll be fitting into my size 32s soon!

As with the Leigh defeat, it’s made the race for the top four incredibly exciting. The Championship is brilliant, so pull your finger out Sky and start treating this competition with a bit more respect!

On the same subject, I was very interested to see the list of the top 50 Championship players, which was produced by the Totalrl.com website last week.

The main thing that struck me in reading the list was that the majority of the players would be able to handle Super League.

Pretty much any of them would be able to play some sort of a role. Most of Super League’s bottom six or seven clubs would be strengthened by signing a few of those players – even Leeds.

Some of them might need an off-season to adapt to the full-time game, but if they were surrounded by better players, better facilities and better coaching staff, they would make the transition without any problems. The quality is certainly there in the Championship.

Sadly, it seems, the mentality of signing journeymen from the NRL is still all too prevalent in the upper reaches of our game and that’s one of the many reasons why Super League isn’t coming close to fulfilling its potential.