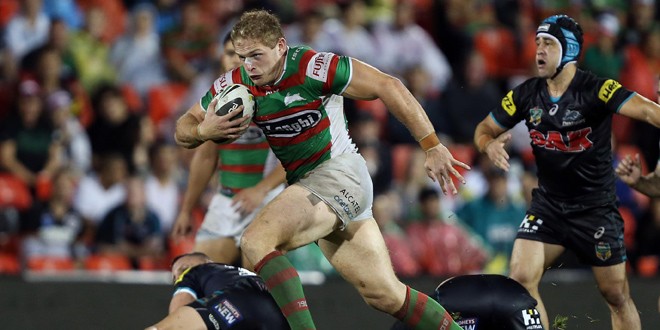 There could be more bad news on the horizon for English Rugby League, as Australian newspaper are reporting that another top English star is being courted by an English union side.

After Sam Burgess’ high-profile transfer to Bath, the Daily Telegraph are reporting that fellow Premiership side Gloucester are interested in another Burgess boy – this time Souths prop forward George.

UPDATE: However, Burgess himself has appeared to knock back any speculation of a move to the other code on his personal Twitter account, sending out a tweet in the early hours of the morning (UK time) saying: “It is not true”.

It would be another astonishing transfer, not least because it would pit two of the Burgess brothers against each other in the 15-man code – and Gloucester owner Ryan Walkinshaw is believed to have made George his top transfet target.

The South Sydney prop scored a barnstorming individual try and was only just shadowed by the performance of his brother Sam, who collected the Clive Churchill Medal with a broken cheekbone and fractured eye socket.

England international Burgess, 22, is contracted to the Rabbitohs until the end of 2016 and will play his sixth Test for England against Samoa in the Four Nations double-header in Brisbane on Saturday.

Souths secured a $1 million fee for Sam Burgess’ departure to union – and it is likely that a similar transfer fee would be demanded should an approach for George be made, too.