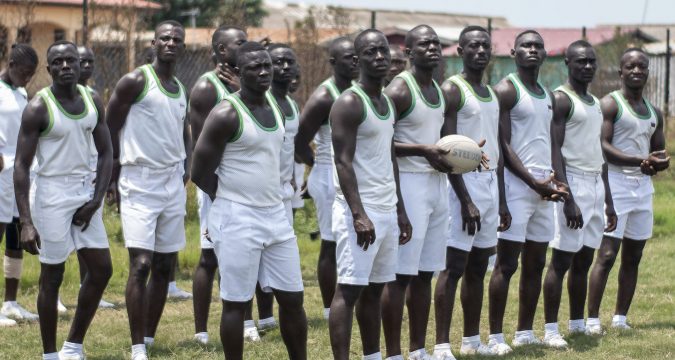 The Rugby League Federation of Ghana has begun to establish the sport in the military, after being asked to train a group of recruits. The ultimate aim is to establish an armed forces competition in the country, which recently gained International Rugby League (IRL) affiliate status, whilst also finding new coaches and match officials.

The RLFG undertook a five session programme for instructors at the Ghana Military Academy Physical Training School in Teshie, which comprised of personnel from various security services throughout the country. The initial project included a touch tournament and small-sided games to introduce them to the sport and increase general fitness levels, together with drills on how to catch and pass, tackle, defend, play the ball and improve overall hand-eye coordination.

Officer-Commanding of the PT School, Lt. Gershon Adasi said: ”Introducing the programme awoke the students’ minds to the game of rugby league. We are happy to have learned new things in the sport such as ball handling and utilizing space in attack and in defence. Playing the touch game made them appreciate the skills acquired. The team coming in from the RLFG has added value to the existing games and sports the Training School teaches, and we are willing to support rugby league.”

Technical director of the RLFG, Marshall Nortey added: “It was encouraging to see how receptive the students and staff were to the different possibilities in the sport for children, young adults, older players and even the seniors. These five weeks of introduction to rugby league have been very successful, RLFG has found new partners in RL development and we shall follow up on the students as they leave for their various units with coaching and officiating opportunities after graduation. Moving forward, the RLFG technical unit will look at interested people from the military who want to learn the sport and help them grow and develop within the discipline.”

RLFG general manager Jafaru Awudu Mustapha commented: “Now that Ghana has attained affiliate status, the possibility of expanding the game is very high and as such there is the need for more coaches and referees to take up the game. There are opportunities coming and I think this is one way that will help us get more people involved and making an impact in communities.”