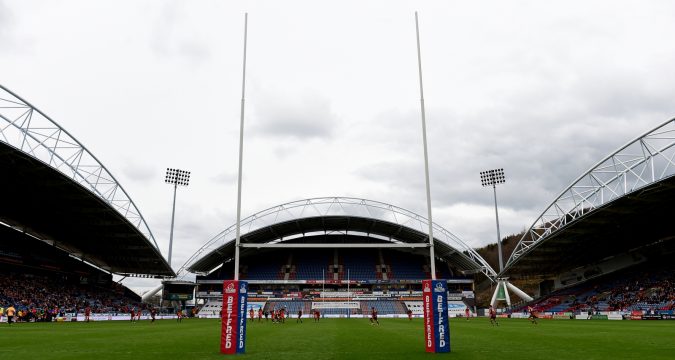 Matthew Shaw speaks to Huddersfield Giants Managing Director RICHARD THEWLIS about his club’s ambition, both for the Giants and for Rugby League generally.

MS: You had a busy week, with two incomings (Aidan Sezer and Owen Trout) and a departure (Kruise Leeming). What’s your take on the business?
RT: Firstly the outgoing was very disappointing. To lose someone we’ve invested in from school who doesn’t then want to go forward with us is disappointing. But, there’s an absolute clear remit and belief from the board that we have to have people who are 100% committed.
We were fortunate that we were able to come to an agreement with Leeds to get a young man in Owen Trout who is an Academy international in his position. He wants to wear the claret and gold, which is vital.
On Sezer, it’s over the line after a number of months; we await the visa but we won’t have any issues. It’s a big move for Huddersfield. Simon (Woolford) wanted a new halfback and Aidan was his number one pick. He met him in Canberra a few weeks back and it took a bit of bringing together. But we’re there and we’ll see him in a couple of weeks.
But that will not be the end of our movements on and off the field. We are evolving, and that takes time.

MS: It’s the club’s first venture into the marquee player market. What made you decide to utilise it?
RT: Firstly, the terminology is ludicrous. Oliver Wilson was the marquee player at his position and in his age in the country. All you’re doing is defining a marquee player on his salary and it’s totally wrong.
Jermaine McGillvary is one in our eyes. Just taking a single definition of salary is nonsense. There’s no hiding from the fact it’s a big investment for us; after all, every club would say the halves are the highest-paid players. The market for UK halfbacks to take us to the top was non-existent and when you go overseas you pay a premium.
But the whole marquee idea is flawed. The game should be focused on the players. Jack Walker at Leeds, Toby King at Warrington; we should be shouting from the rooftops and making them household names. Jack Welsby at St Helens is another. They are all marquee men in their own right.
In rugby union, with their marketing, they make average players look and sound world-class. We make world-class players look and sound average. We have to change that.

MS: You said the club is evolving. How, and what are you doing to evolve?
RT: There is an absolute desire from our Chairman to get the club back into the top three, where it was only three or four years ago. The coaching staff were challenged, Simon Woolford and Ollie Richardson were challenged with what they needed to get there and they’ve been backed 100 per cent.
A big part of our ethos is based around youth and homegrown players. You never know how good your young players are going to become because it’s impossible to predict the future, but we believe that our current crop of 18-22-year-olds is a match of any club in the game. How far they can go is up to them. We want them to go there with Huddersfield, which is why losing Kruise is a blow, but they have to want to be here.
We will always try and sign high quality young British players and take the gamble on them as to how far they can go and some of our recent recruitment shows that. We will always take the view where possible to buy English. But if anyone can name me an English halfback with the attributes of Aidan Sezer, then we do not know of that player, so we have to move away from that sometimes.
We are changing in many ways. From what the coaches are implementing, to the guidance and steadying hand of Andy Kelly. It is different and there are lots of small, subtle changes. We weren’t that far off last year, and we lost a number of games by one score, so a small improvement can have a big impact on our results.

MS: In the last three or four years you’ve had some difficulties with the salary cap and freeing up enough space to let your new coach sign the players he wants. Have you got past that now?
RT: At Huddersfield, we back the head coach. Every player who comes in here is selected by the head coach. The previous head coach wanted to build the squad around Jordan Rankin and Sebastine Ikahihifo. The latest one didn’t. So you have to make changes. The question should be whether our policy of backing the head coach is the correct one. But we believe it is.

MS: If you do that, then stability with your coach is naturally essential?
RT: Absolutely and over the last few years we haven’t had that. But as every supporter knows, results dictate. I say this all the time internally that our job is to keep Simon in a job, because if he does that all is going well and we are doing what we need to do. We support the coach, it’s as simple as that, and everyone here wants him to be successful next year. We seem to be written off in many quarters, which is fine, but we have a quiet confidence. Come February 1st, I think journalists will look at our squad and think Huddersfield could do well.

MS: A big criticism of the club is the crowds that you get. What’s your take on it?
RT: Sitting here today we’re close to our season-ticket deadline and we’re a fraction up on last year. Given the performances on the field last year, I think that is good progress for us. But it is hard yards here and it has to be based on the community. We have the biggest community scheme in Rugby League by far. Our challenge is to filter through the community system and tap into the youngsters and get them here on a regular basis. We don’t have a magic wand. We need a radical change as a game to make attending matches a complete and utter must-do experience every single week of the season.

MS: If you had that magic wand, what would you do?
RT: I would significantly decrease prices. I would base all our policies on supporters, not the players. We should take ourselves into a totally new sporting environment that doesn’t exist. Sport for a family is hugely expensive, whether its’ football, horse racing or even hockey.
I think there’s an opportunity to grasp the market of being affordable for families and for them to be able to go home and away without major financial concerns.
I also think we need to be the sport that’s whiter than white. We should shout about it so much more. We should follow policies like the NFL in terms of behaviours so that the parents of young people know that their children can be proud of the players and look up to them as role models in our community. The best thing is that the players are accessible, they see that as part of their job and we have to tap into that more.

MS: As a club you try to do that with ticket prices. I believe you’ve got the cheapest season tickets in Super League.
RT: Within our own parameters we do try and implement that. But if you look game wide, we don’t sell Magic Weekend, Challenge Cup Finals or the Grand Final out. We have to make it so that we are doing that. We’re all trying, but nobody is succeeding.
I don’t look at club attendances; I look at the attendances game-wide. Is it up on where it was five or ten years ago? No! If we do well our attendance will go up, but with that another team will drop, as they aren’t doing as well as the season before. But the aggregate attendance across the teams will still be exactly the same.
No club is making the significant change from 2,000 to 6,000 or 12,000 to 14,000. One of the things I always say to the group (of club officials) is that what we have done in the past hasn’t worked, so we have to look at it in a completely different way. It’s not a criticism; it’s just a fact. We have to get the 60,000 people who are currently watching every weekend up to 100,000.

MS: Does being whiter than white have to go as far as governance too? You’ll be aware of everything being said about Bradford.
RT: I get a bit fed up of reading about governing bodies. I understand the question but it should remain behind club doors to debate. There’s an undercurrent of unhappiness and isn’t that typical of Rugby League? Our focus here is on Huddersfield. For whatever reason, we have a reason, an inbred mentality of blaming the centre for everything when in reality those issues are probably club related. You don’t see any journalists saying what’s the state of the game in the Premier League or Championship, yet in Rugby League we seem obsessed with the game’s administration. It’s something we need to get away from.