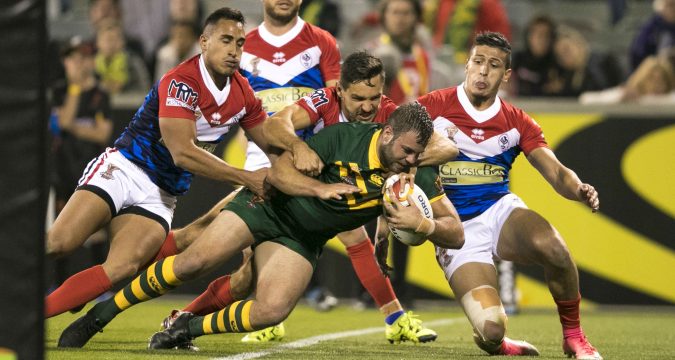 Australia’s Wade Graham equalled a World Cup record as he scored four tries in their 52-6 win over France.

The Cronulla Sharks and New South Wales star scored a first-half hat-trick and scored again in the second period to become only the seventh player to score four tries in one World Cup game.

It was a comfortable victory for Mal Meninga’s side, with France’s only response coming through a length-of-the-field effort from Toulouse fullback Mark Kheirallah.

Graham scored twice in three minutes to give Australia the lead before Kheirallah scored one of the tries of the tournament to cut the deficit to 10-6.

🛩 French fullback Mark Kheirallah turns on the jets for @FFRXIII in the first half.#AUSvFRA#RLWC2017 pic.twitter.com/TzkSZGTElT

But Graham secured his hat-trick before Josh Dugan crossed for a second-consecutive game to give Australia a 20-6 lead at half-time.

It was one-way traffic in the second-half as Cameron Munster and Tyson Frizell both scored before Billy Slater equalled Jack Fulton and Jarryd Hayne’s World Cup try-scoring record with his 13th try in World Cup competition.

Graham would bag his fourth soon after before Munster and Valentine Holmes wrapped up proceedings.