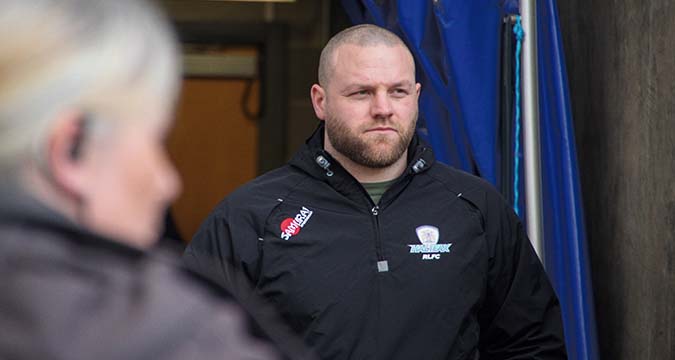 During the Championship’s near year-long absence, no club has overseen change like Halifax.

First, the obvious. A rebrand. 18 years after they took their ‘Sox’ off, they are now the Fax Panthers, a bold yet brave attempt to take the club in a new direction after a prolonged period of consolidation, and perhaps even stagnation.

Fax have consistently been one of the Championship’s big hitters since their arrival in 2004, but this is a club that wants to be more than that. In many ways, the Panther emblazoned on their chest is symbolic of a club actively looking to fulfil those dreams. The rebrand was controversial but has, so far, been successful. Retail sales have shot through the roof, with the club set to record a 100% increase compared to last year.

Any successful sporting organisation needs success on the pitch, and that’s where head coach Simon Grix comes in.

After taking the reins midway through 2019, this season will finally allow him to stamp his own identity on the side.

Just like the club’s identity, playing personnel changes have been significant too.

Long-serving players synonymous with the club have departed. Scott Murrell, the club’s go-to talisman for the best part of a decade, and Steve Tyrer, Fax’s second all-time points scorer, are the most notable departures.

But incomings have been eye-catching. Dan Murray and Gadwin Springer have arrived from Super League to beef up their pack. Greg Worthington, a serial winner at this level, has also signed up. Connor Robinson has returned after steering York to an unexpected play-off spot alongside his halfback partner at the Knights Liam Harris.

“It feels like it’s mine now,” says Grix, who himself is another notable absence on the pitch after being a key cog to their success under Richard Marshall.

“It adds a bit of pressure, I’ve got to hang my hat on this team now but I’m happy with that.”

Change might not be a bad thing. Despite a stunning run in the Challenge Cup back in 2019, it overshadowed a disastrous league campaign which saw the club record its worst league finish in 17 years.

“When things are the same all the time, as human beings we are guilty of being complacent. So we’ve changed some stuff, provided a new angle and a way of thinking.

“It’s no offence to the lads who have gone but things had to change and, in my opinion, a chunk of us got used to doing things the way we were doing it. It needed a freshen up across the board. We had to make tough and somewhat brave decisions.”

The extended time off has given Grix a chance to instil his philosophies into the team. Last year, sprinklings of that were surfacing, though the lockdown denied everyone, including Grix himself, a chance to see it come to fruition.

“One of the big ones is the effort stuff. It’s not the fancy stuff, but if you’re really good it makes you hard to beat before talent comes into the equation.

“But I want to shape us into a team that doesn’t see throwing a pass in yardage as a risk. It’s nice to watch, we may not see it straight away because the weather normally dictates it. But you’ve also got to be able to defend your errors if you play like that.

“I do feel like we’ve improved, apart from Scott we’ve got a younger and more ambitious squad. Dan Murray is an example, he’s a bloke who doesn’t feel the Championship is below him but does he want to be better? Of course he does. We have players with aspirations of bigger things and hopefully, we take them there.”