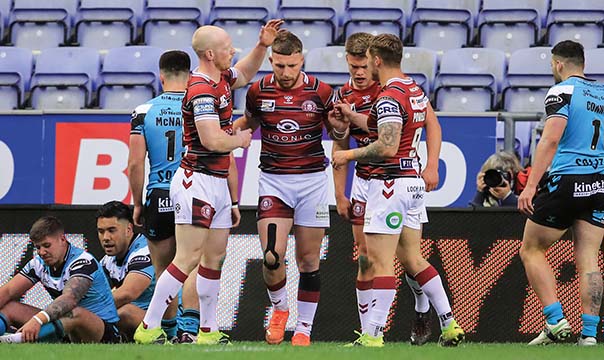 Jackson Hastings’ hopes of signing off his Wigan stay with a Challenge Cup Final appearance may be over.

But the Wests Tigers-bound halfback believes there could well be future Wembley appearances, given the quality of the young players in the squad.

Six of the 17 on duty in the 20-10 quarter-final defeat by Hull on Saturday – Harry Smith, Ollie Partington, Morgan Smithies, Liam Byrne, Joe Shorrocks and Ethan Havard – are 22 or under.

And Hastings said: “This club is in very good hands with the young kids coming through, it’s what makes this club so great and so special.

“I’m just really proud to be a part of it and helping them develop.”

A first defeat of the season was a blow for Adrian Lam, named the inaugural Super League Coach of the Month during the build-up to the tie following five wins from five in all competitions during April.

Wigan will aim to hit back by making it six league wins from six when they host bottom side Leigh next Monday, May 17.

“We will go away from this and be a better team for it, we will be steeled better. We will get to the bottom of it and move forward,” said Lam, whose side beat Hull 16-14 in the league the previous week.

“We played uncharacteristically. With all of the mistakes, it’s not what we are about.

“The game was very stop-start because of all of the errors, meaning we couldn’t build any momentum or pressure. It was a really frustrating game to watch.

“We were our own worst enemy. It’s just frustrating it was on a day like today. We’ve been really good of late.”

Wigan prop Tony Clubb began an eight-game ban for using racist language during the league clash with Hull as the sides met again in the Challenge Cup.

The 33-year-old, who was also fined £500, directed his comment towards Hull forward Andre Savelio, who reported it to referee James Child during the match.