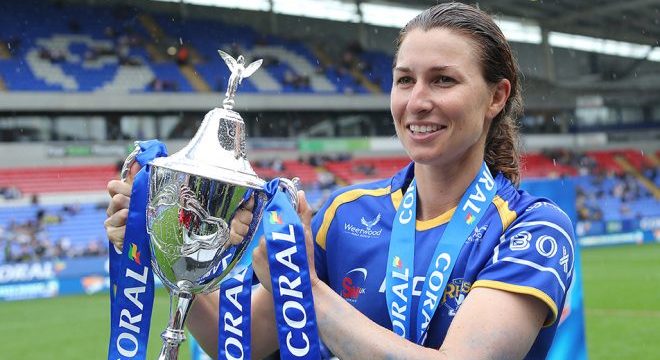 Reigning Woman of Steel Courtney Hill will return to these shores ahead of the new season full of excitement about the year ahead.

Ahead of the big kick-off in March, Hill is temporarily returning to her native Australia to turn out for the Sydney Roosters in the NRL Nines, which takes place next month.

But despite this brief switch of allegiances, Hill remains fully focused on the challenge Leeds Rhinos will face to retain the Super League crown they won in front of the Sky cameras at St Helens last October.

Leeds could find things even tougher this season than last with a mid-season split format making a return to the Rugby League set-up.

After the opening nine rounds of the Women’s Super League, when everyone has played everyone else once, the season will split into the top four and the bottom six. The top four will play each other twice more with the top two at that stage meeting in the Grand Final, which will be played at the Rhinos’ Emerald Headingley Stadium.

The bottom six will play each other once more before a play-off series and Grand Final crowns the Super League Shield winners.

It is hoped that this system will create close and intense fixtures throughout the whole season and Hill believes this could benefit the Women’s game as a whole as preparations continue for the 2021 World Cup.

“Now that the fixtures are out and we’re back in pre-season it really does feel that the season is coming round really quickly now,” said Hill.

“And what an exciting season ahead it’s going to be. We had a great year last year, but it’s a fresh slate now and back to square to one to start again for this season.

“There is enough motivation in the squad to retain title anyway, but knowing we’ll have a chance to win it at one of our home venues is an extra add on. Any home game we get to play at Emerald Headingley is special, so we can dream about us being at the final there. But long long way off yet, the main focus before that has to be on securing a spot in the top four.

“We’d love it to be us, but regardless of who does go on to make the final, it’s a wonderful stadium and a very special place to play at.

“In big occasions like a Grand Final, you want it to be in one of the premium venues, and with new facilities and upgrades at Emerald Headingley, it will certainly be fit for the occasion.

“At times last year there were some big score lines and the split is about providing competitive matches in both the top four and the bottom six. It means that individuals within the bottom six can still be in England ranks because they are always getting those competitive games and it’s a chance for those players to develop and be involved in quality matches.

“At the end of the day we want to create a quality Super League competition, but the bigger picture is about generating talent for the England pathways and making that team competitive on an international scale and this new structure will help with that.

“I know the Leeds girls coming back for their England tour last season were maybe disappointed in how they played on the international stage. But with the competitiveness created with this new structure hopefully, they can go into future internationals and the World Cup with a greater experience and skill level that can meet the demands needed, and then be in contention to win the World Cup.”

And while she will likely enjoy a trip back down under, Hill was fully reminded last weekend what a special club she will be returning to in March.

“There has always been pride in playing for the Rhinos, but events and occasions like Sunday’s game for Rob Burrow and JJB make you realise you are a part of something very special here,” added Hill.