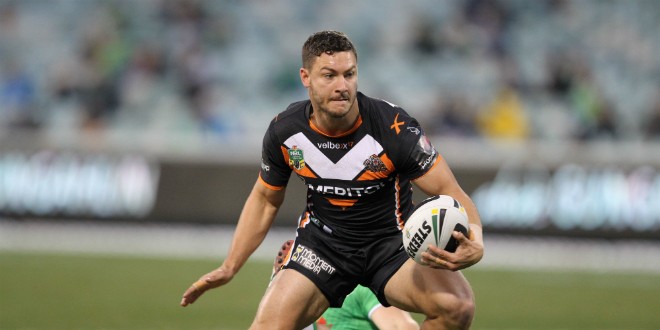 Castleford Tigers have confirmed that Australian Jy Hitchcox has joined the club for the 2016 season, with a club option to extend the deal beyond 2016.

The utility back joins Cas the club after a brief spell in the Championship with Featherstone Rovers, having formerly played for West Tigers in the NRL.

Hitchcox, 25, who is comfortable in the full back, wing and centre positions played four times for Wests Tigers in 2014 and made a try scoring debut against Sydney Roosters in Round 23. During his time with Featherstone Rovers he made 25 appearances and scored 11 tries.

The former Gold Coast Titans, Melbourne Storm and Manly Marlins (rugby union) man has racked up more than 60 New South Wales Cup appearances and has also represented Australia at Under 18 level touring and playing three tests against England and France earlier in his career.

Hitchcox can’t wait to arrive back in the UK and meet up with his new team mates next week: “I’m so excited to head back to the UK and to join Castleford Tigers. The chance to play Super League is a dream come true. I’m really impressed by what I’ve seen of the team and getting the chance to work under Daryl Powell is awesome. I’m looking forward to heading straight into pre season training, and knuckling down to some hard work.”

Tigers head coach Daryl Powell is thrilled to confirm the final piece of his 2016 squad plans: “I’m delighted to finalise our 2016 squad with the addition of a player who I feel will prosper in our environment. Jy will provide quality competition in our outside backs, he has real speed and his footwork will trouble defences of any level. He is a player who is hungry to prove himself in Super League and I am confident in his ability to do just that.”

Steve Gill, Tigers CEO, is excited to see what Hitchcox will bring to the squad: “I’m sure that Jy will become an important part of our 2016 team. His versatility to play anywhere in our back line will make him an excellent addition to what is already a very good squad.”