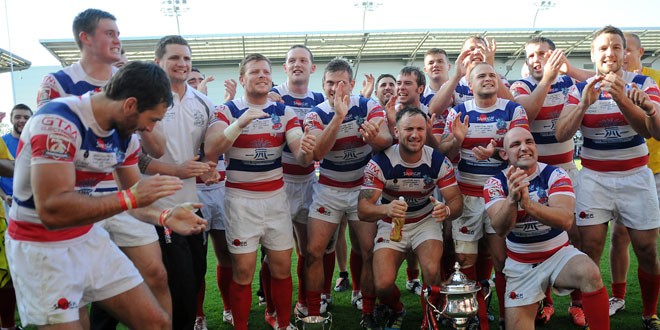 Rochdale lifted their first trophy since 1922 with a hard-fought victory over local rivals Oldham as a fairytale try from local boy Wayne English cemented promotion just two minutes from time.
“I’m immensely proud of the boys from one to 17, and not just of the boys who played today but the boys who have played all season,” said Rochdale coach Ian Talbot afterwards.
“It was tit for tat and I don’t think that the scoreline reflected how tough it was with the two late tries, to achieve something that coaches have been trying to do at Rochdale for 90 years is a proud moment not just for me and the boys but for the club and the fans. It has awakened a sleeping giant and let’s hope that we can now kick on.”
The first half finished all square at 12 points each, with both sides playing exciting Rugby League – Rochdale aided by a strong breeze but playing into the sun.
With nothing between the two sides the kicking of Paul Crook and Lewis Palfrey was often crucial, Hornets having an early try ruled out from a Crook bomb – an early taste of what was to come for fullback Richard Lepori and his fellow Oldham defenders.
However, it was his halfback partner Steve Roper who eventually opened the Oldham defence – his short ball sending Dave Llewellyn over after Warren Thompson had made good ground earlier in the set.
Lepori and Josh Crowley exchanged passes in midfield before Dave Cookson was stopped short. When the ball was switched left there was no stopping Jon Ford.
Crook’s long kicking meant that Oldham were often forced to start their sets deep in their own territory but when Palfrey kicked deep Gareth Langley ran well from his own line, Llewellyn continued the good work in midfield and Hornets crossed when Danny Davies took Alex Trumper’s pass to score.
Two tries either side of half-time transformed the game, following a missed field goal from Crooks opponents Oldham had Cookson held up before Mo Agoro caught a Palfrey kick and passed inside along the ground. Eventually the ball was hacked on, and despite it looking to evade the Oldham attackers it was eventually touched down by Kenny Hughes.
Cookson added his name to the Oldham scorers four minutes into the second half; Danny Langtree offloaded to Lepori and then Matt Haggarty and Phil Joy were stopped short before Cookson scored from Palfrey’s kick.
That put Oldham 18-12 ahead, but the match turned again on another Crook kick, Palfrey being forced to kick the ball dead. Rochdale, from the goal-line drop out, came firing back and Dave Hull eventually went over on the left.
It had taken referee Chris Leatherbarrow 65 minutes to blow for a penalty – he had no option when Oldham were forced to pick the ball up in an offside position on their own line.
Crook duly collected the two points and his next kick was influential when it was charged down by Sam Gee, giving Rochdale a repeat set which was completed with John Cookson reaching over.
Local Rochdale man English wrapped up victory and promotion in real style, when he dived over after a searing break from Langley from a Carl Forster pass, Crook adding the conversion – both he and Palfrey had kicked brilliantly in difficult conditions.
“I have no complaints about Rochdale winning as I thought they played the right kind of Grand Final rugby,” said Oldham coach Scott Naylor.
“They completed their sets and had field position and the unfortunate part of Grand Finals is that you either win or lose – I feel for the lads because they have given 100 per cent since the first day of pre-season. You don’t always get what you feel you deserve – we just didn’t finish the season off.”

GAMEBREAKER: The kicking of Paul Crook. He got better length and direction to his kicks and that meant Rochdale enjoyed possession in better positions than their rivals. In the end that told.

GAMESTAR: Paul Crook, as his coach Ian Talbot said: “He’s immense and he has carried us all the way through the play-offs. Today he tormented them with his kicks and he deserves all the accolades he gets.” Certainly his kicking game was key to Rochdale’s success.