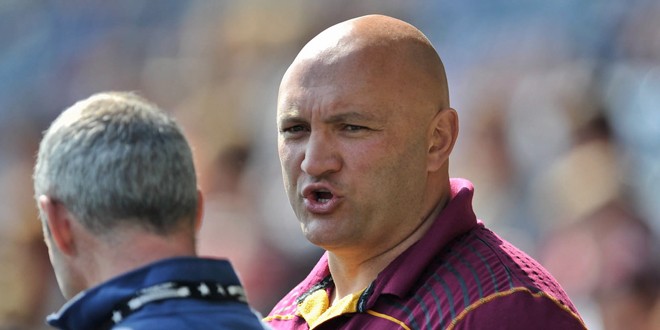 Huddersfield Giants boss Paul Anderson pulled no punches after his side’s 57-4 play-off defeat to Wigan, admitting it was “embarassing” for a number of reasons.

The Giants were far from their best on Thursday night, slipping to their first defeat against the Warriors this season. And boss Anderson has pledged to do everything he can to repay the club’s supporters – who he called “magnificent” – and use their second bite of the cherry wisely next week, regardless of who they play.

“It was embarrassing, wasn’t it?” Anderson said after the hooter. “In fact, I’m embarrassed for a lot of reasons, and I’m certainly embarrassed for the fans who came over in good numbers to see their side serve up something like that.

“I thought they were absolutely magnificent, and the way they kept themselves occupied by singing all those songs when there was nothing to keep them entertained on the field was a credit to them.

“I honestly believe we owe them one for that.

“And I intend to do everything within my power to make sure that’s exactly what we do.”