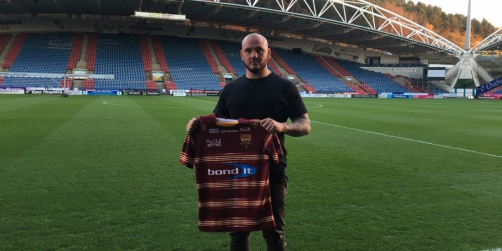 Huddersfield Giants have confirmed the signing of Dale Ferguson on a two-year deal.

Ferguson has re-joined the Giants on a two-year deal, three years after leaving the club to join Bradford Bulls.

The Scotland international made 59 appearances in claret and gold during his first stint at the club and left the Giants after winning the League Leaders’ Shield in 2013.

However, his return to the John Smith’s Stadium has now been confirmed, making him the third Giants signing ahead of 2017, and the third from Bradford Bulls after also signing Paul Clough and Lee Gaskell.

“Dale was signed to the club a while back,” Stone said.

“And so I was keen to see how he would do in the Four Nations and I was suitably impressed. He showed a lot of class and toughness against world-class teams in that tournament, he has a good skills set, is tough and will compete hard, which will bring plenty to our squad.

“Dale has come back early, even though we offered him some time off following the internationals and that shows the type of attitude he has. That is the level of work ethic and commitment we’re looking to have in this squad and I’m looking forward to seeing more of him in training.”

Ferguson added: “It was tough to leave but at the time it was the right time but as soon as the opportunity arose to come back I jumped at the chance. Everyone wants to play Super League top level and I’ve spoken to Rick [Stone] and I like what he is about and what he wants from the club, that’s why I’m on board and I want the club to move in the right direction.

“I’ve been with both Ryan [Brierley] and Danny [Brough] at Scotland for the Four Nations and they are world class half-backs and they’ve proven it against the world’s best, so to play with them at club level is great and I’m looking forward to getting into pre-season now and joining up with the rest of the squad.”

Purchase League Express today to find out which international forward the Giants could be signing ahead of 2017. Buy in stores now or online at totalrl.com/shop