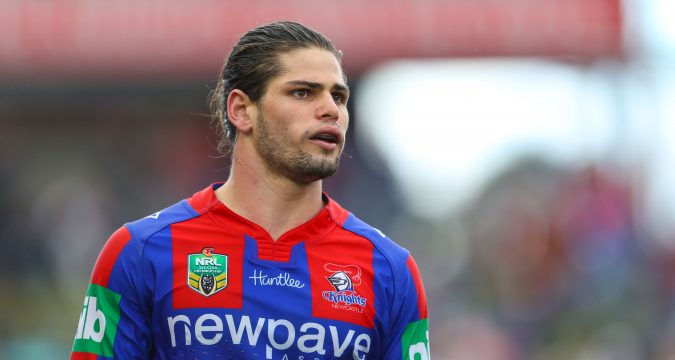 It’s been one of the longest transfer stories of the off-season, but Huddersfield’s move for Newcastle Knights fullback Jake Mamo could have potentially hit a bump in the road.

The exciting, young fullback has been widely tipped to link up with former Knights head coach Rick Stone at the Giants, with Stone telling League Express two weeks ago that he was still hopeful of landing the 22-year-old.

Things looked to be picking up pace when Newcastle announced the signing of teenage hotshot Kalyn Ponga, a promising fullback from North Queensland Cowboys.

However, the Cowboys are refusing to let Ponga join the Knights ahead of next season as he is still under contract at North Queensland until the end of the 2017 season, meaning the Knights may now be reluctant to let their number one leave the club.

“We’ve been on record to say we have ruled it out – we won’t be releasing him,” the Cowboys’ football manager Peter Parr told AAP.

“He’s contracted with us.”

It remains unclear what impact this will have on a potential deal for Mamo, if any at all, but Newcastle might have second thoughts about letting Mamo go should they not be able to replace him, even if Joe Wardle makes a move over to the NRL club.

If Huddersfield are unsuccessful in their attempts to sign Mamo, it would leave them with 20-year-old Jared Simpson as the only recognised fullback in the squad following the departures of Jake Connor and Scott Grix to Hull FC and Wakefield respectively.

Aaron Murphy, Lee Gaskell and Ryan Brierley have all played there in the past, but would likely be best utilised elsewhere in the team.

The Giants were unable to lure Zak Hardaker to the John Smith’s Stadium despite being in the chase, and as time goes on, it will be increasingly difficult to recruit a replacement.