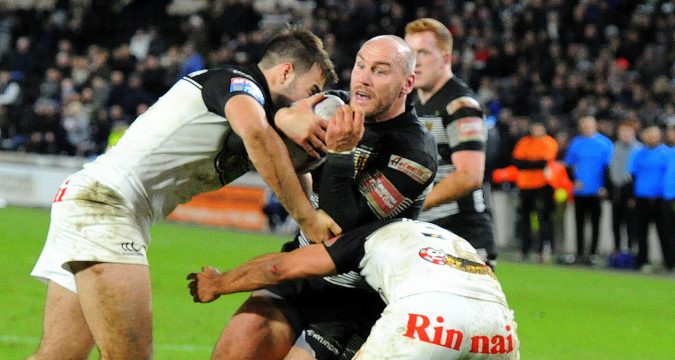 Hull coach Lee Radford has admitted everyone at the club is determined to give Gareth Ellis the perfect end to his career: saying it would be an honour to help him become Hull’s first Super League-winning captain while insisting FC will not let up on their title tilt with an eye on Wembley next week.

Ellis, who will line up for Hull tonight against Huddersfield, announced this week he would be calling time on his playing days at the end of this season to take up a role as Hull’s new Football Manager.

And Radford said that Hull ending the season with a historic double would be a fitting finale for Ellis.

“He’s been huge for us. As a captain he’s grown into the role season upon season. It’s difficult when you’re given it for the first time in your career as a player but he’s grown into it. He’s such a professional and that put him into contention to be captain anyway but vocally he has grown so much.

“He’s one of the greatest we’ve had in his position and it’ll be a real honour if we can get him to Manchester and give him a chance of picking that trophy up at Old Trafford.

“He’s jumping into the (new) role with both feet as he’s at that stage where the next chapter begins but we’re all striving towards giving him the best finish we possibly can.”

With a Wembley final against Wigan just eight days away, Radford has also insisted he will resist temptation to rest players up against Huddersfield tonight – saying they are determined to compete on all fronts and not risk dropping points in the race for a home semi-final in the play-offs.

He said: “I’ll be picking the 13 that is available to me – I won’t be resting any players. There’s no caution going into this game; we’re at a point in the year where you can’t afford to be cautious so that won’t be the case, there’ll be nobody being rested.

“We’ve had a decent week’s preparation and we need one for a team that are obviously hanging on by a thread to make the four. We understand how desperate they’ll be but we know Leeds play St Helens, so one of them will be dropping points. Whether it’s us leaping above Leeds or moving further away from St Helens, someone is dropping points.”

And Radford also insisted he is expecting those players whose spots for Wembley are in doubt to make an impression tonight against the Giants.

“I’d want to put a shift in this weekend, that is for sure,” Radford said. “It won’t do anyone any harm to do so, I don’t think.”