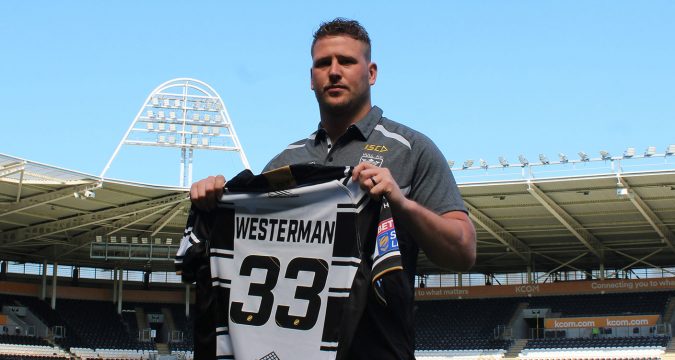 Hull FC have completed the signing of Joe Westerman on a deal until the end of the season.

The 28-year-old returns for his second spell at the club after securing a release from Toronto Wolfpack.

Westerman initially left the Black and Whites to join Warrington ahead of the 2016 season, for a fee of £150,000, before joining Toronto for £140,000 ahead of the current season. But Westerman secured a release from the club this week having played just six games for them.

An England international during his time at the KCOM, he made 127 appearances for the club before his departure.

“Since I left Hull in 2015, the club has grown even bigger than it was before,” explained Westerman, “so it was a no-brainer for me when I got asked to come back.

“Radders gave me the call and pretty much there and then I was able to make my decision. There were a couple of other clubs interested but, like I said, I love this club and that’s why I’m happy to come back here.”

The move sees Westerman reunite with Lee Radford, who he played with and for during his first stint at the club.

“I’m over the moon to be able to bring in a player with Joe’s talent,” sad Radford.

“He’s in a position where this has to work for him, and for that reason I’m sure he is going to do everything in his power to make this a success.

“Our club has changed significantly since Joe was last here. He is coming into a professional environment where we set very high standards and have a strong culture. He understands the challenge that poses and it is one he is relishing.

“I believe he can get back to the level of performance that saw him win our Young Player of the Year Award and get selected for England when he was last here.

“He provides us with another quality ball playing option in an already strong pack, with the versatility to play through the middle, but he’ll need to get his head down and work hard over the coming weeks to earn his chance for selection.”