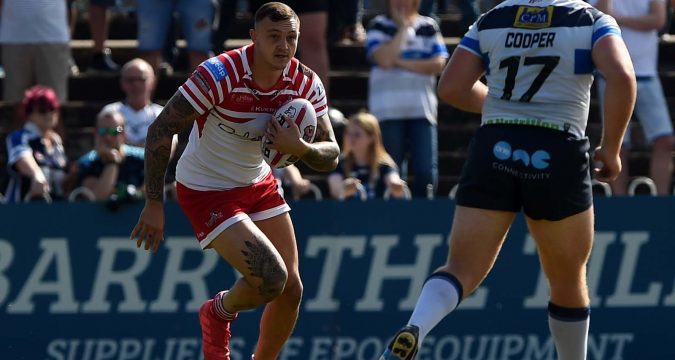 As first revealed by League Express, the pair have joined the Black and Whites as part of Lee Radford’s plans to strengthen his squad ahead of next season.

Former St Helens and Huddersfield outside back Dawson-Jones has joined the club after scoring 18 tries in 28 appearances for the Leyther last year.

The 28-year-old scored 17 tries for Leigh in their Super League campaign in 2017, but has now left the club in order to link up with Lee Radford’s side.

Thompson, who returns to the club after leaving last year to join Leigh, ended the year with Leeds.

“I’m coming here with a point to prove and I jumped at the opportunity play for Hull,” Dawson-Jones said.

“As soon as I heard they were interested in me it was only a matter of time, once I had spoken with the club I didn’t want to go anywhere. It was a no brainer.

“They’ve got some good people here, a really good setup and the history and fan base speaks for itself.

“I have spoken to a couple of the boys who have played at Hull and they all spoke very highly of the club and the atmosphere, so I’m really excited for that.”

Thompson added: “I have some unfinished business here so I’m looking forward to getting stuck in during pre-season.

“I feel in 2017 I maybe became a bit complacent, so moving away from the club I’ve loved for the past four years to play at Leigh and Leeds really opened my eyes.

“I’ve been playing some good rugby during my time away from the club. I think I’m a better player now than when I left this time last year.”