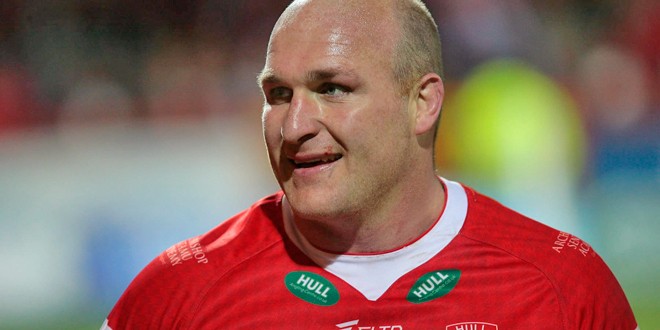 Hull Kingston Rovers prop Michael Weyman has announced his retirement from the sport with immediate effect, bringing an end to an illustrious career in both Super League and the NRL.

The 30-year-old forward has missed the club’s last five matches with a troublesome knee injury and after undergoing surgery a fortnight ago, has now decided to hang up his boots and will return home to Australia with his family in the near future.

Weyman was an NRL Grand Final and World Club Challenge winner from his time at the St George Illawarra Dragons, and also represented both the Kangaroos and New South Wales.

His final appearance for the Robins came in a 28-22 derby victory over Hull FC in a pre-season friendly back in January and he told www.hullkr.co.uk he will retire with fond memories of his time at the KC Lightstream Stadium.

“It has meant a lot to me to play for Rovers and I would like to thank the supporters and everybody at the club for making my family and I feel so welcome over the last 18 months,” he said.

“We’ve really enjoyed our time here and we’ve met some great friends who we’ll continue to stay in touch with after we move back to Australia.

“It’s a sad way to end my career but unfortunately these things happen and I’ve been lucky enough to achieve what I have in the game. It’s now time to look at the bigger picture and think about my family.

“My knee isn’t responding to treatment and I wanted to do the right thing by the club as well. I don’t want to be sitting in the stands for most of the year.”

Weyman joined the Robins from St George at the start of last season and racked up seven tries in 24 appearances for the club.

A prominent figure for the Robins during his time at the KC Lightstream Stadium, he was named the 2014 Community Club Man of the Year and was runner-up in the Player of the Year category to winner Josh Hodgson.

Head coach Chris Chester added: “We are disappointed to lose a player of Mick’s calibre but he has been a great servant to the club during his time here and he leaves with our best wishes for the future.

“He’s been a great leader for this club and this is not the way he would have wanted to end his career, but he’s played at the highest level and can be rightly proud of what he’s achieved in the game.

“The time has come for him to put his family and life after rugby first and he’s made the right decision. He’s a true professional and he wouldn’t have been happy being on the sidelines and not being able to make a contribution on the field. That’s the sort of bloke he is and it’s been a pleasure working with him.

“We’ve already begun the search for a replacement for Mick and we’re looking both in this country and overseas. We now have a full quota spot to play with but we won’t be rushing into any decisions. We have a really close-knit squad this year and whoever we bring in will have to fit in both on and off the field.”