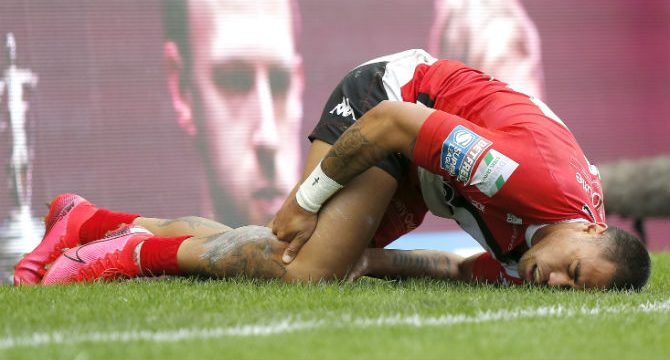 Ian Watson has received a string of injury blows in the aftermath of Salford’s defeat to Leeds.

Ken Sio, Josh Johnson and Ryan Lannon are all set for prolonged periods on the sideline while Chris Atkin is also set to miss a number of games.

All four were taken off as the Red Devils were hammered by the Rhinos on Saturday.

Sio’s injury, in particular, appeared nasty on the eye as his knee bent awkwardly. The extent of the damaged suffered by Super League’s joint leading scorer remains unclear but Watson does not expect him to return to action soon.

“Given it has been a bank holiday we’re still waiting for a scan properly on Ken Sio. But his leg has swollen up massively so he’s probably going to be a long-term injury.”

As for the other three, Watson said: “Josh Johnson felt it might be alright but that’s always the worry because when you do something quite bad, like an ACL, once you get up and there’s no pain and that was our worry. But we’ve had a scan back from him and there’s a couple of things going on. He’s got to go and see the specialist because there are three or four different things going on, so the timescale will be dictated by that specialist now but again, you’d say a minimum of 12 weeks which is a shame as well because he was really starting to come forward.

“Lannon is going for an operation on Friday. Four to six weeks with Lannon. He’s broken a bone in his hand.

“Atkin’s not broke the ribs which is a good thing but the cartilage has been damaged and he’s torn an adductor muscle so that’s pretty substantial. His will all be guided on pain, at the moment he’s in quite a bit of pain. Hopefully it will settle down in the next two weeks and then we’ll see him back on the training field.”